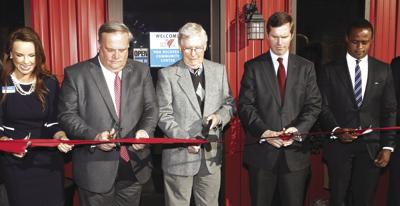 Senator McConnell and Director Carroll praised the leadership of VOA’s president and CEO, Jennifer Hancock, for her dynamic and strong leadership across Kentucky. VOA operates multiple centers throughout the Commonwealth serving women and children as well as our nation’s veterans. The new facility in Clay County will provide residential services to mothers and their children as they work toward long-term recovery from substance abuse.

“As Kentucky continues to endure the unfortunate consequences of opioid and substance abuse, we are reinvesting in comprehensive treatment strategies,” said Senator McConnell.“I’m grateful to Director Carroll for recognizing, once again, the innovative leadership right here in our Commonwealth, and I’m glad to have his partnership as we address this national crisis. As Senate Majority Leader, I’m committed to supporting the life-saving work of Volunteers of America by championing comprehensive legislation and securing unprecedented levels of federal funding for Kentucky. As we continue to bolster our prevention, treatment, and enforcement efforts, we can make important strides to stopping the tragedy of addiction from inflicting pain on more Kentucky communities.”

“It was a pleasure to be in Kentucky today to see the incredible work being done to get more people struggling with addiction the help they need,” said ONDCP Director Carroll.  “The Trump Administration, and all Americans, are fortunate to have great partners like Senator McConnell who choose to devote their time and energy to reversing the pattern of addiction and creating safer communities. Because of the leadership of Senator McConnell and the efforts underway on the front lines across the commonwealth, Kentucky has made progress in accomplishing our ultimate goal: reducing the number of people dying from drug overdoses.”

Jennifer Hancock, President & CEO, Volunteers of America Mid-States, said, “We are so grateful for Leader McConnell’s leadership on this vital issue and his support for our work. We consider our expansion in Southeastern Kentucky so much more than a group of projects.  It's a movement that shows VOA’s long-term commitment to fundamental change.”

Kentucky Senate President Robert Stivers, said, “I appreciate the immense positive impact that Senator McConnell‘s policies and efforts have had on the Commonwealth of Kentucky. But I am most thankful for his partnership in helping combat the scourge of opioids in Eastern Kentucky. This center from Volunteers of America, based in my hometown of Manchester, will have an invaluable and lasting impact on our region by ensuring that mothers struggling with addiction can get clean, deliver healthy babies, and protect our future generations.”

Background: Since becoming Majority Leader in 2015, Senator McConnell has prioritized federal resources to fight the opioid and substance abuse epidemic by increasing federal funding for the response. Under McConnell’s leadership, Kentucky has received more than $240 million to help fight the epidemic. Senator McConnell recently worked with the University of Kentucky to help secure an $87 million federal competitive grant to address the opioid crisis in high-risk communities. He has also helped secure inclusion of some of Kentucky’s hardest-hit counties in the Office of National Drug Control Policy’s High Intensity Drug Trafficking Areas (HIDTA) program to promote coordination and support for law enforcement in Kentucky.

Senator McConnell regularly draws attention to Kentucky’s prevention, treatment and enforcement efforts with the President’s Cabinet and federal agencies. At his request, multiple Drug Czars have visited Kentucky to see the innovative work being done in the Commonwealth. Earlier this year, at Senator McConnell’s invitation, Director Carroll joined the Senator for visits to Louisville and Northern Kentucky