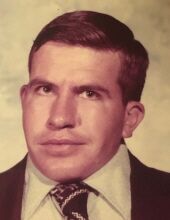 Shafter Jackson, 76, of Manchester, KY, passed away Thursday, July 23, at his home.

Services will be held at 1:00 PM on Monday, July 27th, at Britton Funeral Home in Manchester, KY, with Ryan Smith officiating. Burial will follow in the Milford Cemetery in Greensburg, IN, on Tuesday, July 28th.

Visitation will be held at 11:00 AM on Monday, July 27th, at Britton Funeral Home in Manchester, KY.

A graveside service will be held at 2:00 PM on Tuesday, July 28th, at Milford Cemetery in Greensburg, IN.

To send flowers to the family of Shafter Jackson, please visit Tribute Store.
We need your support