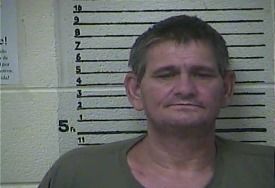 Clay County Sheriff Patrick Robinson is reporting that on June 28, 2020 at approximately 10:00 PM Clay County Sheriff Deputy Coty Arnold along with Clay County Sheriff Sgt. Jeremy Gabbard arrested Mickey Smith, 48 of Highway 687. The arrest occurred when Deputy Arnold was dispatched to a complaint of a red extended cab truck on Green Street. Deputy Arnold witnessed the above mentioned subject disregard a stop sign and initiated a traffic stop for the violation. Through investigation it was determined the subject was operating the motor vehicle under the influence along with having a suspended license. Assisting at the scene was Manchester City Police Sgt. Taye Napier, Manchester City Police Officer Jeremy Garrison and Manchester City Police Officer Wes Wolfe.
Mickey Smith, 48 was charged with:
• Operating Motor Vehicle Under the Influence of ALC/DRUGS/ETC
• Operating on Suspended Operator License
• Failure of Owner to Maintain Required Insurance
• Disregarding Stop Sign