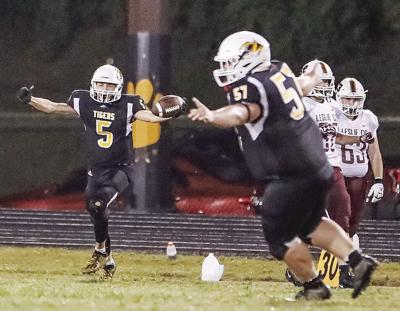 (MANCHESTER, Ky.) – Everyone in Tiger Stadium stood for the final minutes in a contest that was filled with exhilarating plays, and a thrilling ending. Zach Saylor would seal a 26-21 win for the Clay County Tigers with an interception as time expired, sending Leslie County home 0-1, while Clay moves on to 2-0.

The Tigers were faced with plenty of adversity, as the Eagles RB Trent Asher gashed the Tigers for 194yds on 18 carries with three touchdowns. Asher had the Eagles in prime position to win with 3:30 remaining in the contest. Leslie County would punish the Tigers with a late game safety to hold a strong 21-14 lead. Clay was knocked down, but not out.

Tate Rice would lead the Tigers down the field on a methodical drive, taking 8-10 yards at a time with timely passes, and key running from Ben Meadows and Adam Collins. Collins would find the endzone to bring Clay within two on a 24-yard touchdown pass from Rice, 21-19. The two-point conversion would fail, leaving many to think the contest was over.

That’s when Clay would pull off a miracle, getting an onside kick with 2:12 remaining in the game. “Once we recovered the onside kick, we knew we had a great chance of moving the ball and making something happen to get us the lead especially with the way we had been playing the last couple of possessions,” said Tiger Coach Mike Sizemore. “We just had to get ourselves and our players calmed down and ready to execute on that last drive.”

Clay would recover the ball on their own 38-yard line, and Rice would again find Collins in the endzone to take the final lead change, 26-21. Saylor would follow with his game sealing interception.

Sizemore was thrilled with the play of his freshman quarterback in Tate Rice, as he pulled through a rivalry game in only his second start ever. “Tate has done an excellent job thus far running our offense,” said Sizemore. “I don't think anyone on the outside would have predicted what he's been able to do so far into the season but he's still a freshman and there will undoubtedly be ups and downs. Hopefully, he understands that and will continue to remain calm and cool in those situations as he has so far. He came into this season without any 7v7 work and without a true summer practice schedule, so I am extremely pleased with him this far but at the same time he has to stay level-headed and not get too up or too down from week to week.”

Rice isn’t carrying the load himself, as Adam Collins, Ben Meadows, Brady Wolfe, Connor Farmer, Zach Saylor, and Raven Abner have formed what may be the Tigers most dynamic offense in recent memory. “You have to love the toughness of guys like Adam Collins, Connor Farmer, Zach Saylor, Ben Meadows and the rest of our receivers and backs,” said Sizemore. “Those guys fought hard throughout the game to make plays and move the ball.”

Overall, Sizemore was beyond proud of the effort his team put forth. The Tigers played solid on both sides of the ball against an older, more experienced team. “I thought our kids played hard throughout the game and in the end, it paid off for us,” said Sizemore. “Win or lose, you have to love the effort our guys played with out there on Friday night. We were able to move the ball all game and even though we didn't score on some early possessions, we drove the ball deep into their territory and forced them to have to move the ball down the field to have success when they had the ball. I also feel that being able to play last week was huge for us not only in helping us execute in game like situations but also being able to get that much needed game conditioning that showed up late in the game. We are no huddle 100% of the time on offense and that can really wear on a team the longer the game goes on and I think that was huge for us late because in those up tempo 2-minute type settings we essentially are able to run our offense the same way that we do throughout the game.”

Defensively, the Tigers were led in tackles by Connor Rudder and Carson McKeehan who had 15 apiece. Adam Collins added 13 tackles, and Meadows would add 10 of his own. Trevor Spurlock and Dominic Webb would add eight tackles each, while Connor Farmer would round things out with five.

Sizemore was most pleased with how the Tigers never gave up, especially in the fourth quarter. Most young teams would have, but this team is resilient. “In the fourth quarter, we had kids make huge plays like Adam Collins, Connor Farmer, Raven Abner, Ben Meadows, and Zach Saylor so it was very much a team effort in getting the win,” said Sizemore. “Our kids have to continue to play unselfishly and be ready to make the play when their opportunity arises. They went to great lengths to make us drive the ball down the field, not allowing us the big play, and aligning to help on Brady vertically but our guys were able to get in there and still come out on top and that shows a lot of growth.”

The big play potential with this group is enormous, as listed earlier. Sizemore says you never know who could explode on any given Friday night. “With our team right now, you never know who is going to have the big night and that's the way it should be,” he says. “You could take away Brady and then Adam gets loose, or you might try to take away Adam and Connor has the big game, or any possible number of combinations. As long as our kids keep buying in to unselfishly doing their job and playing as hard as they can, we are going to be right in a lot of games this year. People probably don't realize that on the offensive line we were playing two sophomores and a freshman on those last couple of series and they done a tremendous job with the rest of our linemen of protecting our QB and allowing us time to get the ball out. I am big believer in team-oriented ball and as long as our kids keep buying into that, we are going to have our fair share of success with these guys. Since day one, we have worked on building a football program here. We don't just want a good team every ten years or so, we want a program that can compete year in year out in this area and every win like this goes farther into moving those goals forward.”