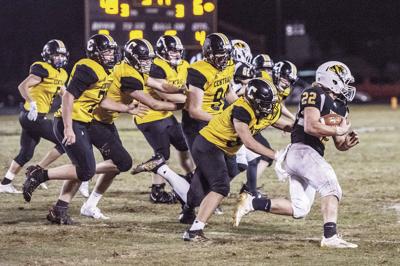 (MANCHESTER, Ky.) – The defending State Champs showed why they are, what they are. Johnson Central came to Manchester and defeated the Tigers 49-6, showcasing what many say is the mountains most premier program.

The Tigers more than had their work cut out for them, as would anyone. “I thought our kids played hard going in against a very tough opponent on Friday night,” said Tiger coach Mike Sizemore. “Johnson Central hasn't lost a game in a very long time now and they have been to the last five 4A state championship games, so our kids knew the challenge those guys would be bringing to us this past week.”

The Tigers only touchdown came on a Tate Rice to Connor Farmer connection, as Rice threw for 133 yards on 14-19 attempts. Farmer led all Tiger receivers with 40 yards on six catches. Trevor Spurlock led the ground game for Clay, rushing for 74 yards on 24 attempts. Raven Abner and Brady Wolfe each would have two catches and 39 yards, followed by Zach Saylor with four catches for 15 yards.

Experience will go a long way for the young Tigers, as they simply don’t have the sheer amount of senior laden leadership as in years past. “We had a lot of young kids out there playing against one of the state's best in all classes and you have to be proud of the way they battled against them and played hard for four quarters,” said Sizemore. “When you play a team on their level you have to be willing to come out there and give them everything you have and take your best shot because if there is a lapse in effort or heart on the field against that type of team it will show up immediately and I thought our kids done a great job of going out there and seeing where they stack up with one of the top 2 or 3 teams in all of Kentucky this past Friday night.”

Coach Sizemore knows if this team ever wants to grow and push the boundaries of what they can achieve, games like this must be played. “I think you actually get more out of playing someone like that (Johnson Central) than you do an average team or even a pretty good team if you are truly determined to have a growth mindset, and wanting to work on getting better,” he said. “They have excellent talent out there, so if you are maybe a step out of place, or not alignment properly, or if you don't get the right read it is going to show up immediately and a lot of times that's not the case on Friday nights. These situations are a lot easier to teach and see on film when you play a team that does a lot of the little things as well as they do.”

Tate Rice, Connor Farmer, and the receivers once again played a solid game, as Sizemore had some praise for his young offense, including the line. Sizemore was thrilled with the tenacity of his team. “There is no let up or back down in Connor, he will go play Johnson Central as hard as he will any team that he walks on the field with and I think that mentality goes a long way in eventually getting to the level of an elite opponent,” added Sizemore. “You can't back down simply because of who they are or what they've accomplished, a lot of kids fall into that trap at this age, but Connor never does that, he went after them with the same intensity and tenacity that he has played with on every Friday night this year. Brady Wolfe, Zach Saylor, and Raven Abner also done an excellent job of catching the football and allowing us to move the chains over the course of the game.”

Rice is turning heads weekly, as he continues to improve in big games. “Tate has continued to play well on the varsity level,” says Sizemore. “A lot of freshmen would have played timid going into that battle Friday and he was able to stay cool and do a lot of the things he's been able to do so far. He still needs to be more conscious of situational football but at the same time what high school kid doesn't. If he keeps focusing on getting better at the little things and keeps working on the mental aspects of the game to show growth everything week then he is going to be an excellent player for us over the next couple of years.”

Trevor Spurlock had a heavier workload this week, as senior RB Ben Meadows was feeling under the weather and unable to compete. “Trevor had to get extended carries this week but was able to show the toughness and determination that he's showed since he's been playing for us,” added Sizemore. “He kept running hard against those guys and was able to gain some tough yards for us. I thought our young offensive line done an excellent job against those guys. We play so many young kids up front, but they were able to battle out there and still haven't given up a sack over the course of our season against varsity level competition. They are going to grow into a very good group over the next couple of years and I am excited to see these guys progress further into their careers.”