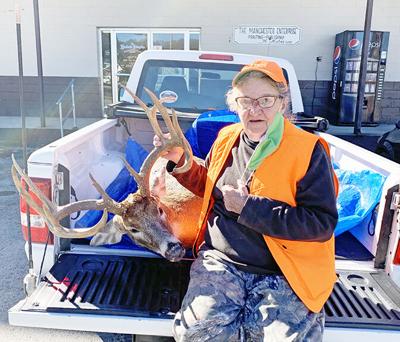 At 75 years young most people enjoy the retirement life and take things a little easy.

On cool fall mornings they usually sit in their homes drinking coffee, at least some do.

But not Dorothy Davis, she spends this time of year enjoying a hobby-deer hunting.

The Thomas Branch woman and her husband Milton enjoy their time in the woods together and spend each fall hunting.

“We have a good time doing this and she loves it,” Milton said.

It was very cold on Thursday morning as they made their way to their secret ‘honey hole’ to hunt.

Dorothy said she caught a glimpse of the big deer just after daylight.

“I could see it out of one eye through the scope, but I didn’t want to move too much,” she said.  “I couldn’t hardly get the stock up so Milton held it for me.”

When Dorothy fired the scope caught her across the nose and brought a little blood.  But the shot brought plenty of blood and dropped the big 15-point buck in its tracks!

When asked how long she’s been enjoying deer hunting she said about 20 years.

“I’ve killed quite a few deer and this one is one of my best,” she said.

The couple field dressed the deer themselves and even loaded it into the back of their truck.

“It wasn’t easy getting it in the back of that truck,” Milton said.

I asked which one field dressed the huge buck and Dorothy said Milton did and laughed.

“He’s got to learn how to do that sometime, so I made him do it,” she said laughing.

The pair came by the Enterprise office so we could take a photo of Dorothy and her buck!

When asked if she was going to keep hunting, she said, “Lord’s will I’ll be back next year!”