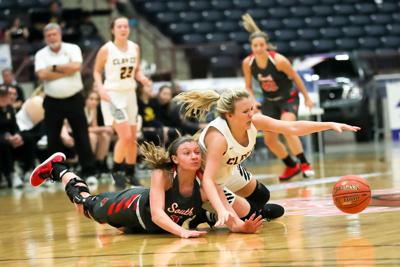 (CORBIN, Ky.) – The eventual region champion would end the Lady Tigers postseason run, as South Laurel defeated the Lady Tigers 86-58 at the Corbin Arena last Thursday night. All-time leading scorer Kaylee Mathis, along with fellow senior Chandler Rice suited up for the last time as Lady Tigers, having given Tiger Nation their very best over the course of four years.

South Laurel lit the Lady Tigers up behind the three-point line, knocking down a 13th region tournament record 20 three pointers. Had they hit just one more, they would hold the state record. Clay County has no reason to hang their heads, as they simply met one of the best teams to pass through the 13th region in years, maybe one of the best ever.

While the game ended in a blowout, the Lady Tigers implanted their game-plan successfully early on. Coach James “Ivy” Burchell is renowned for his ability to take opponents out of their scheme, and he would do just that in the beginning of the game. Clay County would find themselves only down four at the end of the first quarter, 22-18.

The 2nd quarter told a different story however, as the threes began to rain down on the Lady Tigers. There’s not much you can do but shake your head when a team gives an all-time performance against you, and that is just what South Laurel did. The Lady Cards would lead 39-27 at the break. Mathis would lead the way with nine at the half.

Alexis Lewis would add six for the Lady Tigers, showing that she wasn’t afraid of the sheer size of South Laurel in the paint and low post. Hailey Napier would add six, and Courtney Jones two. Coach Burchell returns experience next season, as these girls have now seen the best of the best up close and personal three times in one season.

South Laurel would lead 70-39 at the beginning of the fourth quarter, cruising to the regional title game against cross-town rival North Laurel. Clay County now looks forward to next season, with questions looming of who will step up and lead the way. Returning for the Lady Tigers will be Taylor Asher, Alexis Lewis, Courtney Jones, Hailey Napier, Allie Rose Phillips, and Jaylen Combs. Could next year be the year this young group flourishes? Only time will tell.