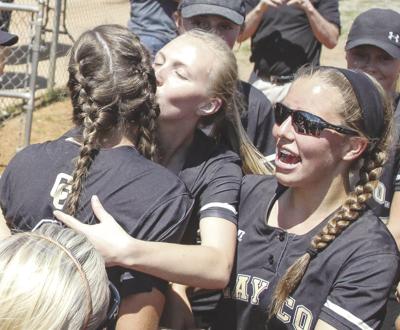 Last week began the four-part series of the Tiger softball dynasty that took Clay County by storm. Seniors Tracey Hubbard, Alex Smith, Rachel Baker, and Kashia Jackson left their mark on the Tiger softball program, having led the team to a 13th region runner up in 2016.

The foundation was laid by Coach Jamie Gilbert and the seniors and boy did they continue to build. Lone senior Meghan Rice was surrounded by the team that would carry the program for the next three years. Rice was joined by then sophomores Brianda Owens, Shelby Phillips, Emma Hurd, Lauren Smith, Kymberlyn Mills, Maddie Frazier, Carley Hoskins, Hailey Napier (8th), Bailey Hensley, Chandler Rice, Jordan Boley, Ellie Finley (8th), Allie Phillips (8th), Kylee Morris, and Avery Fox. The success these girls would go on to have inspired the younger generation to fill their shoes, and the entire softball program has benefited from their contributions. Now we delve into part 2

A three-game win streak to begin the 2017 season would catapult the relatively young Tigers onto the scene, decimating Whitley, Knox, and Harlan Counties to get the season going. This would set the stage for a highly successful regular season, as coach Jamie Gilbert and Co. would breeze through the months of March and April, losing only five games to 11 wins.

The Tigers were rolling on, until an 11th inning 4-3 loss to North Laurel on the road. The loss humbled the Tigers, which sparked a 10-game win streak to prepare Clay County for the postseason. The team knew they’d run into the talented Jaguars once again, and they wouldn’t take the opportunity for granted. Little did they know, that loss would be the last time Clay County would lose to the Jaguars to date, in 2020. Clay has since reeled off five straight wins against the Jaguars, with three of those coming in district title games.

The 10-game streak came to a halt as Harlan County squeaked by Clay 2-1 in a rare home loss for the Tigers, again helping prepare them for a postseason run. Clay would close out their regular season with three wins coming against Middlesboro, Jackson County, and Williamsburg. Following an opening round 12-0 stomping of Jackson County in the 49th district tournament, the stage was set, a North Laurel/Clay County matchup in the district finals.

Clay County would jump ahead of the Jaguars 2-0 on a rain-drenched field, as Tiger pitcher Brianda Owens smacked a home run over the wall to bring Emma Hurd home from 2nd base. That momentum would carry over into the next few days, as a strong system of storms moved through the area and pushed the 49th district title game back and moved the venue to Union College. Clay County and North Laurel would go head-to-head for the 2nd time, with the Tigers desperately needing to get over the hump that was the Jaguars. Get over the hump they did, winning 4-1 in dominant fashion. “It’s the greatest feeling ever, but we’re not done yet,” said Shelby Phillips. “We’re going to go into the region with this same mentality.”

Clay County would steamroll Lynn Camp 8-0 in the opening round of the 2017 13th region tournament, sending fear into the hearts of rival, and heavily favored, South Laurel. Laurel County had dominated the scene of 13th region softball over the years, as they never had a true challenger other than North Laurel. Clay County begged to differ, as they feel they were overlooked, and rightfully so.

After a hard-fought battle with the Cardinals, the Tigers unfortunately came out on the losing end of the 2017 semi-final matchup, closing the book early before Clay County was finished writing. Losing 4-2 to a superbly talented South Laurel team hurt at the time, but it helped motivate Coach Gilbert and the girls to flip the script next season. The loss in the 2016 region final and now the 2017 region semis made many wonder, can this team can get over the Laurel County hump? They were the proverbial thorn in the Tigers side, had been for years, and seemed to continue to be.

What would follow the next two years would propel the Tiger softball program to new heights that many didn’t imagine possible. With a district title now under their belt, the Tigers prepared to once and for all oust the Jaguars and Cardinals. Part three next week!