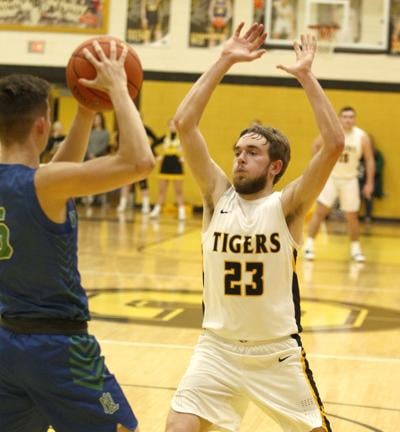 Selfless. That’s a word you rarely hear in athletics today, as modern culture is defined by those who simply want to “get theirs”. Many athletes today worry about only themselves, being noticed, pushing aside team-oriented goals. It’s even infected a lot of parents, as they are self-centered only around what occurs with their child, rather than the good of the team.   It’s something you see sweeping the landscape in America and it’s an unsettled trend.

One could use numerous adjectives to describe Tiger senior Jakob Begley. The one word that kept popping up from his peers was selfless. For those who don’t know him, Jakob Begley is a starting guard at Clay County High School. He’s been deemed many things by many folks, and none are bad. You simply can’t say a bad word about Jakob.

A three-year starter as a Tiger, Jakob also averaged roughly 8-10 minutes per game even as a freshman. He’s been “the heart and soul” of the Tigers ever since. Begley averages three points, and two rebounds per game, a stat line many would feel like isn’t that valuable.  But that doesn’t hold true with Begley.

Seeing it on paper, you’d think Jake doesn’t have much effect during games. You couldn’t be more wrong to assume that.  What he brings to this Tiger basketball team could be one of the most important aspects an athlete could have—he makes his teammates better.

His coach says his contributions are bigger than a stat sheet.

“Jake will go down as one of the best defenders to grace the court at Clay County,” said Tiger coach Glenn Gray. His importance to this team doesn’t always show up in the box score. He guards the opposition’s best player each night, and always does a tremendous job. He gives maximum effort.”

His teammates echo the sentiments of Coach Gray. While the numbers may not be in the box score, Jakob is considered the perfect teammate.

“Begley is a great teammate because he doesn’t care about the stat sheet,” said Connor Farmer, a junior guard at Clay County. “He is, in my opinion, the best perimeter defender in the 13th region, and one of the best teammates as well. He plays with everything he’s got in every game. I’ve loved getting to play with him these past three years and learning from him.”

Begley excels on and off the court. His grades are spectacular, and he is highly respected for the way he carries himself to not only his teammates, but to anyone he may bump into.

“The phrase, ‘lead by example’ perfectly describes Jakob Begley,” said CCHS Athletic Director Tommy Nicholson. “Begley is a great teammate, an ideal student-athlete as he excels in the classroom, and overall, he’s a terrific young man.”

Fellow seniors Jacob Curry and Evan Langdon have saw Jake’s unselfish play for years. The trio are the lone seniors on the Tiger basketball team and have played together since 2nd grade at Hacker Elementary.

“I’ve known Begley since about 2nd grade, and through that time I’ve learned that he will put other people before himself and is a great teammate and even better friend,” said Curry. “That shows in the way he plays by not playing for personal stats and putting the team first.”

Langdon spoke highly of Begley’s sacrifices he makes to put others ahead of himself.

“He’s the best defender in the region, hands down,” said Langdon. “He sacrifices a lot of open shot opportunities just to get the rest of us going offensively, finding open looks for us. He’s not a stat sheet stuffer, but he does the dirty work for our team. Jake is someone we count on both on and off the court, he’s tremendous.”

The Tigers go beyond just being teammates. Being from a tight-knit community, these kids are in some form related, and the bond they share as teammates extends well into family life says Tiger junior Tate Farmer.

“As a friend, he’d do anything for me or anyone of us. I’m happy to call him my cousin,” said Farmer. “Jake is a big reason why we win ball games. He could care less if he has zero points, as long as we win. He’s the most unselfish player I’ve ever played with at any sport.”

Heart. Few athletes play with it these days, as everyone has become focused on materialistic things, stats, and so on. What drives Begley is his heart and love for the game says Tiger junior Connor Robinson.

“He has the most heart on this team out of all of us,” said Robinson. “He’s such a fierce competitor. We all aspire to have a motor like he has. I’m dreading to see him graduate this season, he’s going to leave such a void. I’m not sure anyone can fill his shoes for what he means to us as a teammate, and the impact he has on games.”

His defense is what earned him respect throughout the 13th region.  But the senior talks about his play modestly and hopes he is an example for future Tigers.

“I would have to say I have always focused on my defense, but my freshman year is when I really started working on doing things that coaches looked at because that was my way of getting playing time,” said Jakob. “Many young kids worry only about scoring, but what they don’t realize is that coaches need players that will go out and give them 110% no matter what they are asked to do.”

One thing about Jakob that doesn’t get nearly enough recognition is his success on the golf course. Tiger golf Coach Jason Smith coached Jakob for eight years, basically watching him mold into one of what he called “one of the finest young men he has the pleasure of knowing” throughout his life.

“Jake is a coaches’ dream,” said Smith. “It was an absolute joy to coach him for eight years. Whether he hit the ball good or bad, his demeanor never changed. He had one goal, and that was to post a good score for his team. He will go down in history as one of the best to ever play at CCHS.”

You can read this story and hear all these things yourself, but it’s worth the price of admission to see Jakob up close in action. It’s imperative that you pay attention to his actions off the court just as well as on. Begley is wrapping up a career at CCHS having not stuffed the stat sheet; but leaving a much bigger legacy than many before him.

“I want to be remembered solely for giving it all I had,” said Begley. “I hopefully have inspired those who will play after me to put the team first and allow their individual goals to follow. I love this team, this county, and I will be forever be a Tiger.”

Sorry, there are no recent results for popular articles.