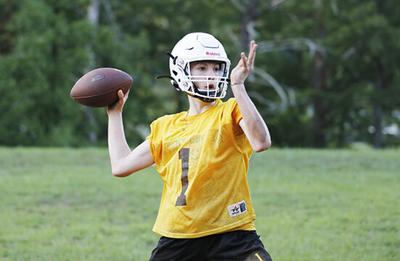 (MANCHESTER, Ky.) – The Clay County Tigers (7-4 in 2019) will kick off their 2020 season on Friday night at Tiger stadium against the Lynn Camp Wildcats. Clay stomped Lynn Camp last season on the road, winning 51-13 in what was their most dominant win of the season. Both teams graduated plenty of seniors, so expect tons of questions to be answered come Friday night.

“Lynn Camp is going to be a tough opponent coming in on Friday night,” said Tiger coach Mike Sizemore. “Those kids over there have always played hard every time they step on the field and I expect Friday night to be no different.”

Coach Sizemore and staff, along with all coaches across the nation, have done a tremendous job in preparing their teams during the COVID-19 pandemic. “An opening game is always tough to prepare for even during a normal year and as we know 2020 hasn’t been anything close to normal thus far,” said Sizemore. “We are coming into the game blind when it comes to preparing for what they do and who their best players are as there have been no scrimmages this year and the only film we have on them is from last season so we have to be ready to adjust on the fly if need be and our guys have to be able to accept that as part of the deal until more game film gets out there and teams are able to prepare to a greater extent.”

The Tigers lost valuable senior leadership to graduation, including former starting QB Ethan Hacker. Freshman Tate Rice steps into a job with big shoes to fill. Hacker led the Tigers to a 7-4 record, after years of losing. Talented, savvy, and filled with potential, it will be exciting to watch Rice grow and lead the Tigers for the next four years.

Sizemore knows the tough challenge that lies ahead with players stepping into new roles, not just at the quarterback position. “It’s going to be interesting to see how a lot of our kids adapt to the pressure of playing on Friday nights this fall with the amount of kids we lost to graduation last year,” Sizemore stated. “We are going to have a significant amount’ of players making their first start and playing their first key role in a Friday night game plan this week so how well they are able to adapt and play with that pressure will be a key factor in how successful we are. We have some talent and potential, but we need them to be able to grow up quick and be able to fight and make plays in tough games. Making those tough plays and fighting against adverse conditions to win tight games is a trademark of having a seasoned, veteran team and the quicker our kids can get there the better off we will be.”

Lynn Camp faces the same challenge as Clay, as they lost plenty to graduation as well. Effort and intensity are what Sizemore needs from the Tigers this week. “If we are able to get out there and play with great effort and intensity when the ball is kicked off on Friday it will definitely help our cause,” said Sizemore. “I am always excited to start a season and like I’ve said I feel like our kids have potential but it’s unrealistic to think there won’t be any growing pains in the opener or even the first couple of games with the amount of kids that are transitioning into key roles this season. I do know our kids and our coaches are excited to get out there Friday night and this is a huge step to getting some normalcy back for our program, I’ve said since this began that it would be a great feeling to be able to walk back out there under those lights on Friday night and it’s hard to believe we are finally at that point, we are thrilled as a program to be able to play and I am sure Lynn Camp feels the same way.”