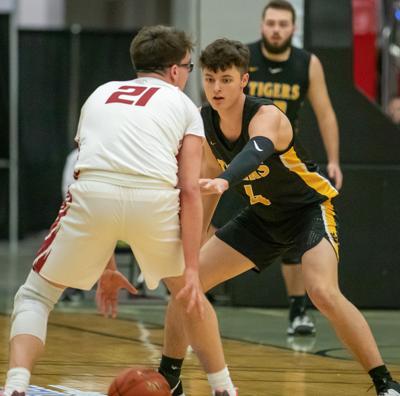 (CORBIN, Ky.) – If you were to take a glance at the box score, you’d quickly assume that Clay County should have defeated the Harlan County Black Bears to advance to their 1st region championship of the new decade. Winning in every statistical category except points scored, the Tigers fell victim to an excellent Black Bear team 65-58, ending a season filled with high expectations, and championship aspirations.

This was a Tiger team who seemed destined to grace the court at Rupp Arena. That destiny was re-written by a team no one expected to sneak into the region title game, Harlan County. Led by a balanced attack, Harlan County standout 8thgrader Trent Noah would lead the Black Bears over the Tigers with his 16-point six rebound performance.

Clay County came out of the gate hotter than a two-dollar pistol, as Connor Farmer (12pts) drilled two consecutive threes in the opening minutes. Jakob Begley (7pts) would sink a deep three as well, only to be responded to by a Jackson Huff (15pts) three. Clay would lead 15-13 at the end of the first, setting the stage for a game that would seemingly go down to the wire.

With tension mounting, the Tigers began to realize just how hard of a task was in front of them. The Black Bears, led by their four double-digit scorers, would go on to outscore Clay County in each remaining period.

“They made plays down the stretch and we didn’t,” said Coach Glenn Gray. “Hat’s off to them, because they essentially took (Jacob) Curry out of the ballgame. I thought he pressed a bit. He’s a senior and wants to win. He has had a great year.”

Connor Robinson (18pts) would lead off the 2nd quarter with a bucket almost immediately, however Harlan County’s Jackson Huff would fire back with one of his four three pointers, 17-16 Clay. The Tigers would take control for nearly the entirety of the 2nd quarter, leading 27-19 after another Robinson bucket. A quick Black Bear nine-point swing would turn the tide before the half, as Clay County surrendered six of those nine points within the last minute to head into the break with a 31-30 one-point lead.

“We know Robinson is a great player and they really have no weaknesses, but Curry makes them go,” said Harlan County coach Michael Jones. “We wanted to know where he was at all times.”

That nine-point shift in momentum would prove to be pivotal. Harlan County would respond to each Clay basket with one of their own. Clay County would hold a three-point lead after Begley scored with 3:01 remaining. Huff would nail a dagger three to give Harlan the lead for the first time in the game.

“We didn’t make good decisions. We weren’t as aggressive on offense in the second half and we didn’t run our sets,” Gray said. “We went one-one-one or one-on-two too often when we should have relied on our sets. They did a good job of taking away our first option, but the second and third options were right there.”

Evan Langdon (11pts) would sink a free throw to open a slow starting 4th quarter to tie things at 45-45. Huff and Noah would push Harlan ahead 49-45, only to have Jacob Curry (4pts) drill an NBA range three, followed by a Robinson bucket to give the Tigers their last lead of the game, 50-49. Harlan’s Taylor Spurlock would drive down the middle of the lane for a runner, followed by a Noah basket to push the Black Bears back ahead. From there, Harlan wouldn’t look back, closing out the Tigers in epic fashion to advance to meet Knox Central in the finals.

The Tigers graduate Curry, Langdon, and Begley. While not delivering a region title to Tiger Nation, they left a lasting mark on the Tiger program with their hustle, sportsmanship, and being role models for the next generation. Clay County will aim to return to the top of the mountain next season led by Connor Robinson, Connor Farmer, Raven Abner, and Tate Farmer.