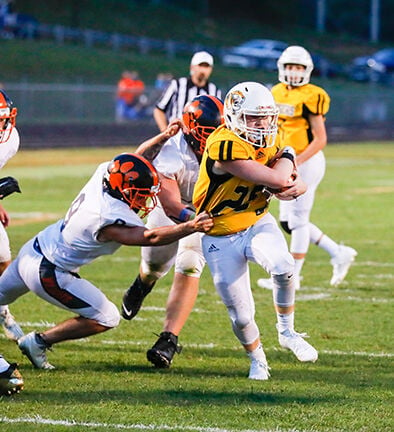 The Tigers got off to a rocky start, fumbling on the opening play which led to a Lynn Camp score. Clay County would rally quickly, leading 15-7 by halftime. Tiger coach Mike Sizemore felt his kids progressed as the game went on. “I felt like our kids’ level of confidence increased as the game went on and our guys got better the more they played,” said Sizemore. “I was pleased with the way our kids were able to play themselves out of the hole we got in early with that fumble. We could have blown up at that point and things could have spiraled out of control for us but we kept our composure and done the things needed to do in order to right the ship and put ourselves back in position to win the game.”

Sizemore knows his team is relatively young, and he has lots of new faces at new positions. “It’s like I’ve said going in, we are inexperienced right now and the more our kids play and the more the play together the better they are going to be,” said Sizemore. “We had 7-8 kids on both sides of the ball making their first varsity start and playing for extended time on the varsity level so to have a little bit of a slow start to the game especially this year with the limited practice we’ve had wasn’t really surprising as a coach. We were able to drive the ball the majority of the night and was able to punch it in the endzone on the majority of our possessions so I felt like we were going to have a great shot to win if we could get over some hurdles early and not get in a deep hole starting out.”

The Tigers would respond well after heading into the half with their 15-7 lead, as they would come out and open the flood gates on an offense that was seemingly holding itself back. Brady Wolfe would emerge, returning from an injury he suffered in basketball season, leaping up and snagging an amazing one-handed interception. He would score on a 62-yard bomb from Tate Rice on the ensuing play, setting the tone for the remainder of the game.

The Tigers got it done on the offensive side of the ball, but Connor Rudder took completely over for Clay County on defense. He led the team with 18 solo tackles. Connor Farmer had 15 tackles, 2 sacks, and 2 TFL, while Ben Meadows added 14 tackles of his own.

Clay would close things out over the course of the final two quarters methodically, handling Lynn Camp with ease to cruise to their 35-20 win. Coach Sizemore was pleased with effort put forth by the Tigers. “I was pleased that we were able to go out and get a win to open the season but like most teams I have been able to watch on film over the weekend we still need work and that’s probably something I always say regardless because it doesn’t matter who you are you can always get better,” said Sizemore. “It being so early in the season I felt good about how our kids were able to be in the right spots and we were able to make sure the right personnel were on the field throughout the game. After we got over the nerves and those early jitters our kids were able to settle right in and do the things we needed to do in order to win. We were able to capitalize and create explosive plays that gave us an advantage. Lynn Camp was able to drive the ball and control the clock on a little more than I liked, we had a few penalties that extended drives for them like the roughing on the 4th and long when they were punting and the pass interference that gave them a first down in a huge long yardage situation but I do feel like our kids will get better situationally, and we will come out better for it in the long run.”

Sizemore also had some high praise for players who had exceptional games. “Adam (Collins) played an exceptional game for us on Friday, he had 8 receptions for 122 yards and two touchdowns while carrying the ball twice for 17 yards and a score. Adam is explosive when he gets the ball in his hands in space and a good part of our offense is designed to put him in that position and he done a great job of capitalizing on that Friday night.

Sizemore knows how big of an impact Brady Wolfe made as well. “He made several athletic plays in crucial times that helps put us over the top, he is just scratching the surface of his potential and the sky is the limit for him over the next couple of years.”

Newcomer and Tiger basketball star Connor Farmer made his presence known early and often said Sizemore. “Connor was in their backfield all night when we were on defense, he is a huge part of our pressure and coverage packages as well as our offense and played an excellent game in his first varsity football start. We are excited to have the effort and intensity that he brings to the field for us this year and his ability showed out there Friday night as he took a huge chunk out of what they were trying to do to us early in the game. I love the approach he has to the game, his willingness to go 110% and the level of toughness he brings every time he steps on the field has been a great addition.”

Ben Meadows and Connor Rudder gave great senior leadership throughout the game. “These guys played a great game at the linebacker position for us Friday, they were near the ball every play and done a great job of taking away some of their misdirection runs after halftime which was a huge part in us being able to limit them on offense. Ben also done a great job in the backfield running for 81 yards on 18 carries on the night.”

Lastly, Sizemore knows his freshman QB stepped up in a huge way. “He’s (Tate Rice) worked extremely hard to put himself in a situation to have success and I was glad it was able to happen for him on Friday. On the flip side, he is going to have struggles at times as all freshman, but he will grow from it and I am excited to see him grow in our offense.”