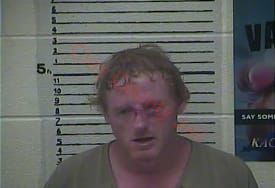 Clay County Sheriff Patrick Robinson is reporting that on March 26, 2020 at approximately 1:00 AM Clay County Sheriff Deputy Wes Brumley along with Deputy Kendric Smith arrested Carl Stewart, 48 of Bullskin Branch. The arrest occurred when Deputy Brumley received a complaint of a fight between the above-mentioned subject and another family member.

Upon arrival, Deputy Brumley conducted an investigation at which time he determined the above- mentioned subject had been in a physical altercation and allegedly had shoved down a pregnant woman. Once the subject was told he was going to be placed under arrest, he became extremely irate and attempted to strike Trooper Smith. After a brief struggle the subject was placed under arrest without further incident. Assisting at the scene was Kentucky State Police Trooper Jarrod Smith.

Carl Stewart, 48 was charged with: