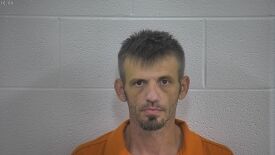 Laurel Sheriff's Deputy Dustin Saylor arrested Ronnie Dewayne Lockaby age 41 of Jewel lane, London on Friday evening September 11, 2020 at approximately 4:41 PM. The arrest occurred off US 25 approximately 6 miles South of London after information was developed on the possible location of a reported stolen vehicle. Upon arrival at the scene Deputy Saylor conducted an investigation and learned that the vehicle – a gray colored Kia Forte had been reported to London city police as a stolen vehicle. Deputy Saylor located a suspect in the passenger seat of the vehicle noting that the subject’s belongings were in and about the vehicle. Also, the suspect claimed ownership of a vehicle parked next to the reported stolen vehicle. Ronnie Lockaby was charged with receiving stolen property under $10,000 and was lodged in the Laurel County correctional center.

Man with warrant for pulling knife arrested after seatbelt stop