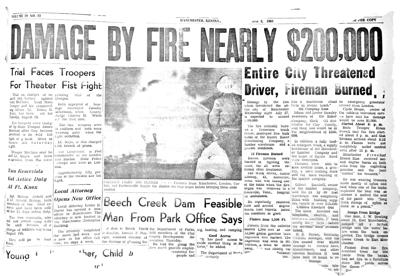 (Editor’s Note: On July 27, 1961, the city of Manchester nearly burned to the ground as five bulk fuel tanks exploded at the Daniel Baker Oil Company. the following is a portion of the story from the Enterprise.)

Damage by the fire which threatened the entire city of Manchester Wednesday night July 27 is expected to exceed over $200,000.

Eleven firemen were burned in fighting the blaze, but all were treated and released after treatment.

The truck driver, James Lindsay,
41 of Knoxville, who was filling one
of the tanks when the fire began, was removed to a Knoxville, TN hospital by

Flames from the enferno soared 1,500 feet as one 12,000 gallon gasoline tank exploded and burned. The explosion was seen in Mt. Vernon, a town 40 miles away and was clearly visible in London, Barbourville, McKee and Harlan.

Another 12,000 gallon tank also exploded and landed about three hundred feet south after ripping down trees and shrubbery.

Exploding gasoline from the tanks threatened the entire city causing many citizens to flee for their lives.

Fire fighting units from London, Corbin and Barbourville worked with

Manchester firemen for four hours before bringing the unpredictable blaze under control.

Ralph Rice, who lives 25 miles away in northern Clay County, said the glare from the blaze “looked like a mushroom cloud from an atomic bomb.”

Isham and Lester Hensley, co-owners of the Baker Oil Company, Shell Oil Distributer for Clay County, said their loss would be in the neighborhood of $100,000.

In addition, fully loaded transport truck, a supply warehouse of Manchester Lumber Company and the home of Squire Reed was destroyed. Firemen were able to save another home, a grocery store, a used clothing store and the main store of the lumber company.

State Trooper Elden Powell said the fire started around 8 p.m. and that firemen were there by 8:15 p.m. Flames

were not completely under control until about 11 p.m.

Manchester Fire Chief Ernest Rice received second degree burns on both arms from the exploding gasoline and it melted his trousers.

He was wearing trousers made mostly of nylon and said when one of the tanks exploded, the heat was so intense it melted the seat of his pants into “long thick strings of nylon as thick as a pencil.”

One man J.W. Bowling, about 23, of East Manchester, jumped off a 50 foot swinging bridge into the water below when the tank exploded. The bridge crosses Goose Creek to East Manchester.

Flames from teh fire scorched trees for 500 yards and set fire to the furniture store 200 yards across the Goose Creek river in town.

A Different View by Betty Crabtree