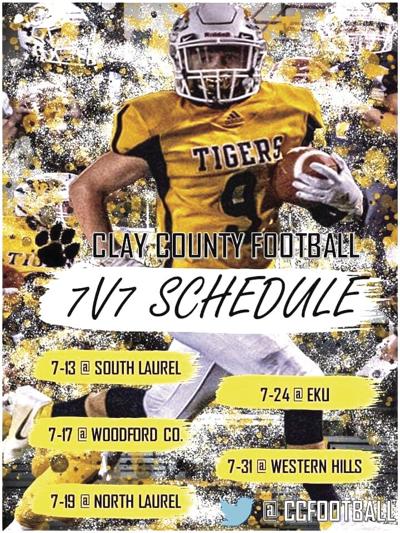 (MANCHESTER, Ky.) – With each passing day, football season draws closer and closer. The KHSAA mandated dead period looms, then the real fun begins. Tiger Coach Mike Sizemore is excited to get his team and skill position players back into action.

“I am a firm believer in getting our kids out there and letting them compete in some the best tournaments we can find,” said Sizemore. “We have built a solid schedule for our kids that will potentially put them against kids from all over the state. It teaches our kids to get out there and compete. Those July tournaments are hot, and kids get tired as they are trying to get their legs under them for the season, but they still must have that winner’s mentality to go out there and keep fighting to win.”

Due to COVID-19, 7v7 tournaments were shut down last season. Sizemore is anxious to see those return. “We missed out on 7v7 events last year and we did not get a chance to polish our kids up in the passing game and introduce our pass coverages against solid competition before going into the last season,” said Sizemore. “We are really looking forward to that this year. Our team is set up to have success throwing the football as we did last year but even more, so you better be willing to get out there and stop teams by being physical and although it is a 7v7 setting we constantly stress defense and physicality to our kids as an important characteristic of winning teams.”

Passing league tournaments are geared toward skill position players, such as QB/RB/WR. Coach Sizemore has a plethora of talent to choose from, as he has multiple starters returning at all positions. “A 7v7 event is beneficial to our QB’s and WR’s as one would expect so I look for Adam Collins to be a tough matchup for most teams that we will run up against this summer,” said Sizemore.

“I also look for him to have a big season this fall and continue right where he left off last season as one of the most explosive, hard-nosed, players in our area. Brady Wolfe, Zach Saylor, Carson McKeehan, Ethan Hensley, and Casey Rice will all prove to be tough to cover this summer and I think our receiver group will be a very tough group to defend on Friday nights this fall.”

“With Zach and Brady’s height, speed, and play making ability along with Casey’s sure hands this will be a fun group to coach,” added an excited Sizemore. “Carson and Ethan will bring toughness to those positions with their size and strength. Tate Rice is going to get a lot of reps at QB this summer going into the season and really sharpen up in reading coverages and timing up his footwork with our receivers’ routes which will allow us to be polished going into August. I expect a big and exciting year out of our QB/WR group this fall and that will really start to show during our 7v7 work.”