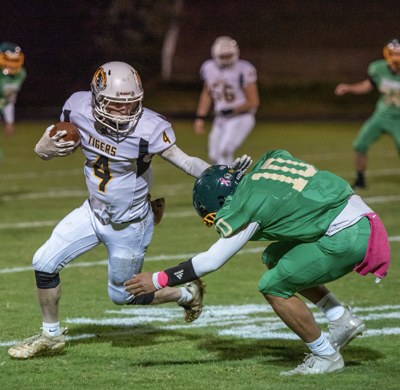 (GREENSBURG, Ky.) – The Tigers notched their 4th and final win of the season with a 26-14 victory over Green County. Clay County would finish the hectic 2020 campaign with a 4-3 record, completing another winning season for Coach Mike Sizemore.

The Tigers had a feeling that this would be a hard-fought road game, and it was exactly that said Sizemore. “We knew going in that this game had the potential to be a very hard fought and close game on the road. The first half ended up as such. Anytime you play on the road and especially when you get outside of the local teams in a given area, it gets tough to win and that was the case Friday night.

Sizemore was thrilled with the Tigers effort and gave praise to their mental toughness. “I was really proud of our kids in the way they fought and the way they kept playing within our game even though some things didn't go our way early. Our guys kept on playing and stayed within ourselves and most importantly we didn't panic. That really shows a lot of growth and maturity in our kids and our program, we felt like we were going to be able to win if we just stayed the course and that's exactly the way it went.”

It was another efficient game for freshman QB Tate Rice, as he tossed three touchdowns and threw for 167 yards. The Tiger rushing attack was led by Ben Meadows 89 yards, followed by Trevor Spurlock’s 23 yards. Adam Collins, Raven Abner, and Connor Farmer were each recipients of Rice’s touchdown throws, as they once again showed why Clay County has what may be the most dangerous set of wide receivers in the mountains.

Stingy defense propelled the Tigers to victory says Sizemore, as he gave high praise to the effort on that side of the ball. “Our defense has played the best they have played all year in the last two games and that's really what allowed us to take over once our offense got going,” said Sizemore. “Raven Abner had a long touchdown reception to tie the game back up early and keep us in it. The scoop and score by Zach Saylor early in the second half really turned the tide of momentum our way for good and we really started to pull away after that play. We told our kids at halftime that we needed to start out the second half strong and set the tone on the defensive side of the ball and that's just what we done.”

Consistency helped the Tigers pull away late in the game, as chunk plays helped secure the win. “We had several huge plays in succession in the second half that allowed us to take over the game,” said Sizemore. “Saylor had another huge reception that set up another score, Adam Collins and Connor Farmer both had two hard fought touchdown receptions in which they showed tremendous effort to get the ball in the end zone, and Ben Meadows and Trevor Spurlock kept running the ball hard to grind out the win. Our defense continued a great effort in the second half as we forced multiple fumbles with Adam Collins and Zach Saylor both coming up with huge interceptions to seal the game for us.”

The Tigers finished another solid season, and Sizemore expressed how proud he was of the group. “Our team has done an excellent job this season. With the hand that we've been dealt this year it's amazing to see a group of kids come together and continue on with the success that we have been building here. We constantly stress to our kids that we want a good program and not only a good team every once in a while and they know what that means.”

“We don't want our tradition and pride to graduate and these kids have done an excellent job of buying in and continuing on with another winning season this season. With last season being our first winning season here in around a decade, this is the first time CCHS Football has put together consecutive winning seasons since 2007 and 2008. Our players have done a great job buying in and bringing our football program back to respectability.”

“We have also had kids that have turned in tremendous seasons for us statistically this season. Adam Collins and Connor Farmer are setting and #1 and #2 in 4A in receptions as of now with Collins being one of the top scorers in the state. Tate Rice has been one of the leading passers in the state this season, and Connor Rudder is one of the top tacklers in 4A. I am proud of our team as a whole, with all that we lost on our offense last year we have come right back and averaged nearly 30 points a game and have been one of the top offenses in 4A this season. We lose some excellent seniors that have played hard for us this year in Connor Farmer, Connor Rudder, Dalton Mathis, Raven Abner, and Ben Meadows. They have done a great job of keeping our program trending upward and have continued to lay a solid foundation for what it means to be a Tiger Football player.”

Sizemore also bragged on the effort of the programs handling of the COVID-19 Pandemic, as they were fantastic in following protocol. “On top of everything, I am also extremely proud of the way our players and coaches have handled playing football during the Covid-19 situation,” said Sizemore. “It's amazing that our kids have been in contact since the summer and they have been able to keep the virus out of our program. This shows the high level of care and responsibility our players and coaches have had this year and the sacrifices they have made in order to be able to play ball this season. It was almost a guarantee if our team would have been exposed to the virus we would have lost time and games, so you have to give these guys credit in that regard. We also have to be thankful for our local district administrators and board of education for allowing our kids to participate in sports this year, we have had excellent support throughout this season locally and it's resulted in our kids getting an opportunity to play as much or more than anyone in the state on a weekly basis and that means a lot to our program.”