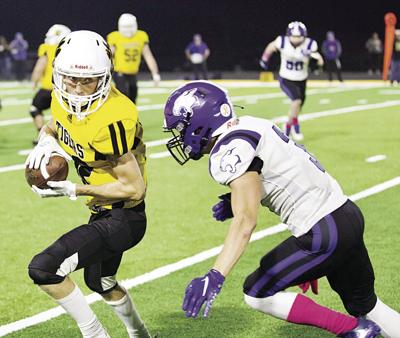 (MANCHESTER, Ky.) – The 4-3 Tigers will make the trek east across the Hal Rogers Parkway to go to war against a motivated Perry Central Commodore squad. The Commodores (4-3) have lost three of their last four and will be looking for redemption after a 41-0 loss to Johnson Central.

Coach Mike Sizemore knows the environment will be a hostile one on the road and knows it’s simply never easy to head into Perry County, and come home with a win. “We know going into this week that Perry Central has a very solid football team and it’s always tough to play those guys, especially at their place,” said Sizemore. “It will be a hostile environment and our kids have to be prepared mentally to go into that type of atmosphere and play their best football. We have several things we still want to accomplish this week and putting the best team out there is our primary goal.”

Perry Central is led by quarterback Chanse McKinzie. He averages 108 ypg thru the air, and 44.3ypg by rushing. They also boast talent at the running back position with Cayde Miller, Elijah Gayheart, and Kobee Eldridge. The Tiger defense must step up and stop the run, or it could be a long night in Perry County.

Overall, Sizemore wants his team to remain hungry. “I’d like to see our kids come out hungry this week and not be satisfied with what we have accomplished up to this point because we know it’s going to take a great effort by everyone to get to where we want to be,” said Sizemore. “Perry has a lot of talent and they can make plays so they will definitely challenge us in all facets of the game. They can throw, run, and play very solid on defense. You can see they have improved over the course of the season and our guys better be ready to play when we go over there Friday.”