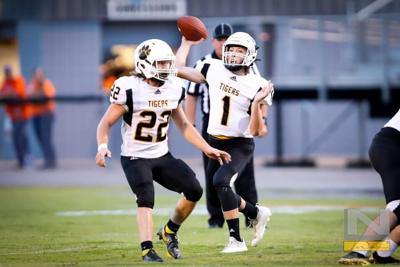 (SILER, Ky.) – Highlighted by a balanced offensive attack, the Clay County Tigers (2-1) rolled over Lynn Camp 40-0 on the road for their second win of the season. Behind a strong passing game, efficient running, and stingy defense, the Tigers handled their business and now look ahead to hopefully compete in their first home game.

Tiger sophomore QB Tate Rice (13-15, 177yds, 3 TD’s) turned in another solid performance as the leader of the offense, guiding Clay County like an experienced sailor in rough waters. Trevor Spurlock once again led the rushing attack, picking up a score, and 92 yards on 12 carries. Adam Collins crossed the endzone with a touchdown, and 52 yards on nine carries. Freshman Tyson Wagers led the receiving corps, notching six catches, 76 yards, and a score. Casey Rice and Brady Wolfe also caught TD receptions, with Rice hauling in 58 yards, while Wolfe had 41.

Coach Mike Sizemore felt his team played with intensity, and great effort. “I thought our kids came out and took care of business on the road this past week,” said Sizemore. “We are executing well on both sides of the ball and done the things that we needed to do to have success. We created turnovers on defense and had several explosive plays on offense that allowed us to pull away and come up with the win. You have to give Lynn Camp credit, those guys came out and played hard, they turned us over on our first possession deep in their territory, but our kids were able to stay mentally focused through that adversity and score on nearly the rest of or possessions before getting our young guys some time.”

In years past, the Tiger offense lacked much versatility. Now we see five guys finding the endzone, as one can safely say the entire scheme has been revamped, for the better. “I was really pleased with the way our guys played as a team throughout the game,” said Sizemore. “We had 5 different guys score touchdowns on the night with Trevor Spurlock and Adam Collins running for a score each while Brady Wolfe, Casey Rice, and Tyson Wagers came up on the receiving end of touchdown passes from Tate Rice. It was great seeing so many guys having success and also seeing Tyson and Casey score touchdowns for the first time on the varsity level. We also had a big safety recorded in the stat line from senior lineman Zander Hensley. Our team played well, and I feel like we are moving in a positive direction, the more guys we have getting involved and having success makes it tougher to prepare for us and ultimately makes us better in the long run.”