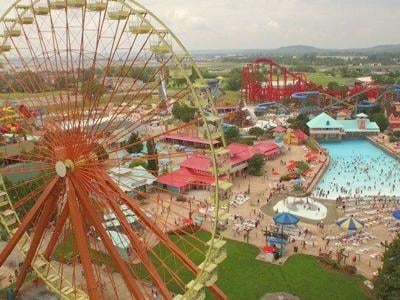 A new operator is taking over Kentucky Kingdom and Hurricane Bay, just in time for the 2021 season, which is just 10 weeks away.

During a Tuesday press conference, it was announced that Herschend Enterprises will operate the theme park in Louisville.

“This is one of those days that we haven’t had enough of in the past 11 months,” said Gov. Andy Beshear.  “A day where we get up and we can clearly see the future, a future beyond this pandemic.”

The governor said Herschend has an impressive history of delivering world-class entertainment to its guests.  “Every year, Herschemd entertains more than 14 million guests at 25 properties in eight states. This is a partnership that takes good foundation, a good attraction and turns it into an international destination, to see the finest in Kentucky and to spend their time both at the park and in our community.”

Kentucky Kingdom and Hurricane Bay together are a 65-acre entertainment complex that offers visitors the convenience and value of two parks in one. It opened in 1987 following an announcement by the Kentucky State Fair Board that a theme park would be built on the grounds of the Kentucky Fair and Exposition Center. Negotiations with Herschend Enterprises began last year for the sale of ownership interest in Kentucky Kingdom, LLLP.

“After opening Newport Aquarium in 2008, we’ve been actively seeking an opportunity to bring even more entertainment to the great state of Kentucky and that dream begins today,” said Herschend Chief Executive Officer Andrew Wexler. “We’re honored to be welcomed into the beautiful and historic city of Louisville and thrilled to build upon the exceptional legacy of Kentucky Kingdom.”

Craig Ross, who has spent the last ten years heading Dollywood, has been named general manager of Kentucky Kingdom and Hurricane Bay.

“This is an exciting moment, and I am so honored to work alongside the community, our season pass holders and our valued guests in building a bright future for this beloved park,” said Ross. “We strongly believe in using guest and community input to create amazing experiences and will be reaching out to the Louisville community for input on enhancements they’d like to see at the park, including attractions, shows and events. This feedback will be critical in creating a long-term plan for success and growth.”

--Building the appeal for multi-generational families.

--Enhancing product and guest experiences through rebranding and the addition of Herschend-owned programming, such as costume character appearances.

--Expanding the season to provide entertainment to more park guests.

--Building relationships with state and local tourism partners to increase awareness and entice travel to Kentucky Kingdom, Louisville and the state.

He added, since they are taking over the park just ten weeks before its opening in May, don’t expect any major changes this year, and emphasized that those who have already bought season tickets for 2021 will have those passes honored.

Louisville Mayor Greg Fischer admitted he was concerned when he heard the theme park might be sold, but was relieved to find out it was Herschend. “I couldn’t think of a better partner for us because of the proximity of the attractions they have, and the values that they have as a company are exceptional.”

Ed Hart, who was CEO of the amusement park, stated, “All good things come to an end. It’s been the opportunity and joy of a lifetime to lead Kentucky Kingdom, not once but twice. I’m pleased to leave the park in the capable hands of Craig Ross, Kentucky Kingdom’s new general manager.”

Man charged over false report of girl swept away by flood