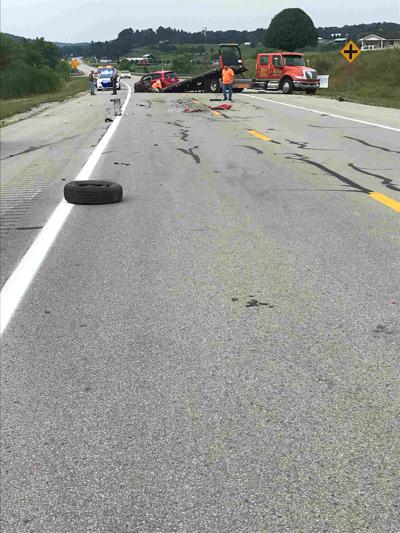 Laurel County Sheriff John Root is reporting that: Laurel Sheriff's Deputy Robert Reed investigated a two vehicle non-injury traffic crash involving an under the influence driver on KY 30 approximately 9 miles north of London on Thursday morning July 30, 2020 at approximately 10:24 AM. Deputy Reed reported that apparently a red colored Chevrolet Aveo was traveling southbound on Highway 30 when it swerved into the northbound lane of Highway 30 side swiping a gray colored GMC Sierra pickup and the trailer it was pulling causing severe damage to the trailer knocking it off its double axles. The driver of the Aveo was determined to be under the influence and was reportedly swerving all over the roadway and speeding and its driver talking on a cell phone at the time of the collision.

The driver of the Chevrolet Aveo was identified as Ronnie Hoskins age 54 of Tyner, KY and through investigation was determined to be under the influence – this subject was found in possession of a crushed pill and rolling papers. This individual was charged with operating a motor vehicle under the influence – third offense; operating on suspended or revoked operator's license; failure to wear seatbelts; possession of a controlled substance – third-degree; possession of drug paraphernalia; driving a motor vehicle using a handheld mobile telephone. This individual was lodged in the Laurel County correctional center.

The driver of the Sierra pickup was identified as Hobart Baker age 46 of Manchester.

Photos of crash site provided by the investigating deputy. A Rockcastle County Sheriff's deputy assisted at the scene.