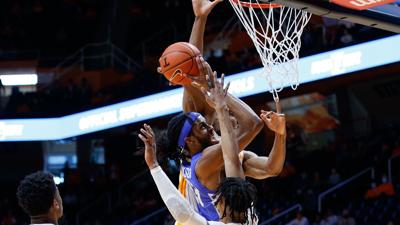 While Jackson was intimidating inside for the Wildcats (8-13, 7-7 SEC), Davion Mintz was accurate from the perimeter, hitting all five of his 3-point shots in the first half and finishing with 15 points.

Keion Brooks Jr. had 14 rebounds to go along with 10 points for Kentucky.

Kentucky had a 15-0 run that made it 23-10. Mintz had two 3-pointers in that burst and Jacob Toppin had a pair of baskets.

Up 15 at halftime, Kentucky got the lead to 60-40 midway through the second half.

James gives the Vols a level of versatility they don't have with anyone else on the roster. He has the ability to be effective in the backcourt and has also had success at power forward this season, giving Tennessee an option to go with a smaller lineup.

Kentucky: After having several early-season games postponed, what the Wildcats need now is experience. Coach John Calipari said Friday he may try to add a couple games with mid-major teams before the SEC Tournament.

Tennessee: Twenty-one games into the season and the Vols are still looking for consistency, especially from senior big men John Fulkerson and Yves Pons. They've showed signs of responding recently, but need to show up on a regular basis. Freshmen Jaden Springer and Keion Johnson have stepped up to shoulder a share of the burden.

Kentucky: The Wildcats are home Tuesday for Texas A&M, a team that has struggled in the SEC this season. This will be the first meeting between them this year.

Tennessee: The Vols will travel to Nashville on Wednesday to take on Vanderbilt in a game that was postponed from Jan. 12. Tennessee knocked off Vandy 81-61 earlier this season.