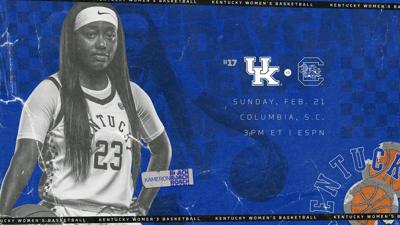 LEXINGTON, Ky. – A whirlwind week for the No. 17 University of Kentucky women's basketball team that has seen several postponements and travel issues due to the inclement weather across the southeast region of the nation, will hopefully find normalcy Sunday as the Wildcats travel to face No. 2 South Carolina for a 3 p.m. ET tip inside Colonial Life Arena.

The game vs. South Carolina will be televised on ESPN with Ryan Ruocco and Rebecca Lobo on the call. The action can be seen through WatchESPN on computers, smartphones or tablets. Darren Headrick will have the call on the UK Sports Network on 630AM WLAP in Lexington. Live stats and free live audio will be available online at UKathletics.com.

Kentucky (15-5, 8-4 Southeastern Conference) started the weekend with a strong win Monday at Florida, scoring 88 points and hitting 53.7 percent from the field. The Wildcats then had to stay an extra night in Gainesville due to weather, before having their Thursday game with LSU postponed to Friday before it was eventually postponed again Thursday afternoon. The postponement has left Kentucky focusing squarely on the highly ranked Gamecocks as it enters the weekend.

Rhyne Howard led the way for Kentucky, scoring 31 points with four 3s made, nine rebounds and two steals. The performance makes Howard the fourth player in school history to have at least six career 30-point games and the first player in school history to have three career 30-point games against SEC opponents. Howard now has 1,493 career points, which ranks her 11th all-time at UK, needing just nine more to reach the top 10 all-time in scoring. The native of Cleveland, Tennessee, is the only player in the SEC this season to lead her team in scoring, rebounding and assists as she averages 19.7 points per game with 7.2 rebounds per game and 64 assists. She also has hit a team-best 38 3-pointers and is second on the team with 67 steals.

South Carolina (17-3, 12-1 SEC) is coming off its first league loss of the season Thursday at top-25 ranked Tennessee. The Gamecocks led 37-25 at halftime but the Lady Vols scored 50 second-half points to come back and earn the 75-67 win. Sophomore center Aliyah Boston scored 17 points with 16 rebounds, adding a block in the game. Guards Zia Cooke and Destanni Henderson each had 15 points and three rebounds with Henderson adding six assists.

Sunday will be the 69th all-time meeting between Kentucky and South Carolina in women's basketball. The Gamecocks have won 12 of the last 13 meetings in the series. UK has lost three straight games to the Gamecocks. The Wildcats last win against SC was a 65-57 win in Columbia on Feb. 21, 2019. The Gamecocks lead the series 19-11 in games played in Columbia.

NMWA update--things are looking up!