Skip to main content
You have permission to edit this article.
Edit
Subscribe
Our Publications
Home
News
Sports
Opinion
Digital
Calendar
Classifieds
Advertise with Us!
e-Edition
1 of 2 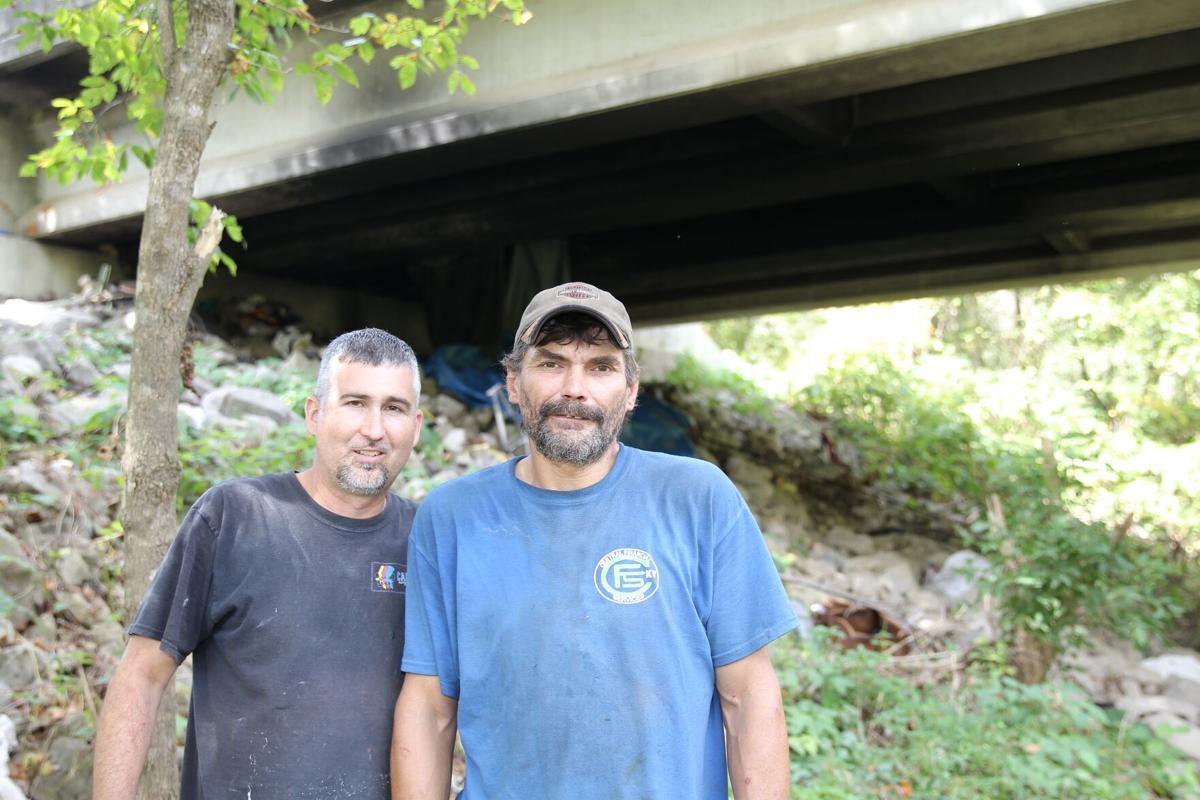 Former elementary classmates Kevin Maggard (LEFT) and Daniel Horn crossed paths again last summer when Maggard found Horn living under a bridge on Big Creek.  In the background is where Horn lives under a bridge on U.S. 421 at the Red Bird River. 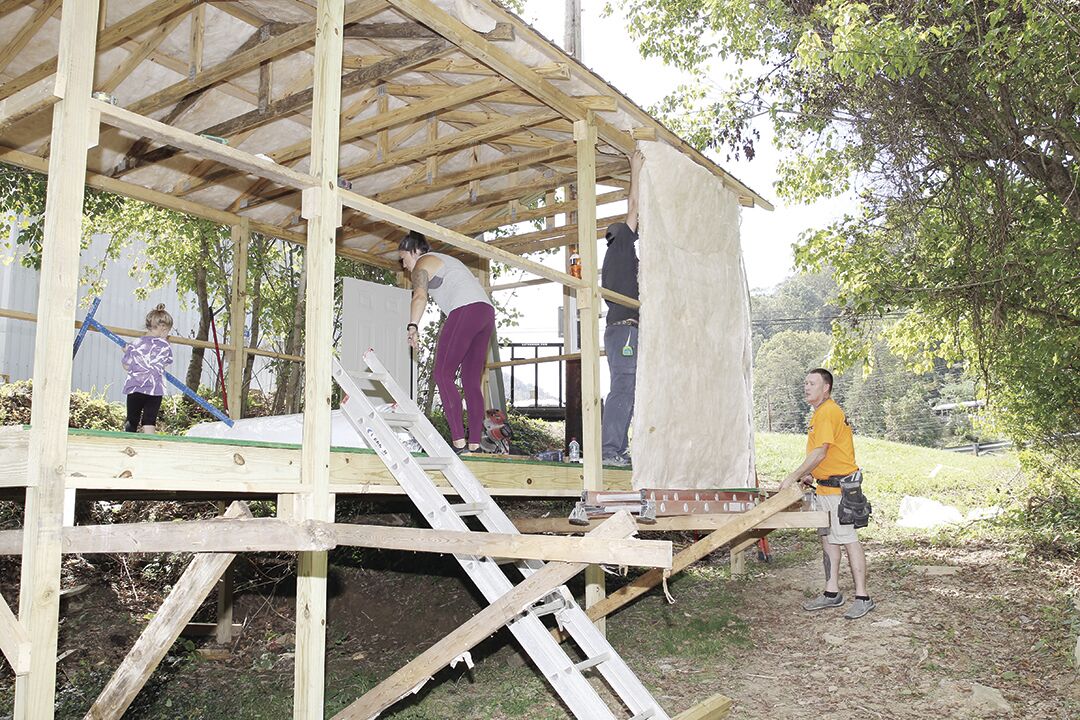 Heather and Travis Smith (far right) from Pulaski County, volunteered their time to help on Horn's new home.  If you would like to help Dan, contact Kevin Maggard on his Facebook or call 606-599-0071. 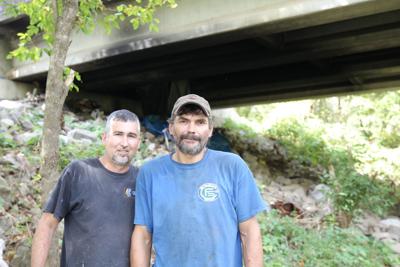 When Kevin Maggard decided to move his body shop from Bullskin to Big Creek he was looking to expand.  But what he didn’t expect during his move was to find a former classmate living under a bridge.

What some would have viewed as a bad situation has turned into one of the biggest blessings one could ever imagine.

This is a story about second chances and showing God’s love to a friend in a world today filled with self-centeredness.

Last summer, Maggard was relocating his body shop to a building at the junction of U.S. 421 and Ky. 66 formerly known as Red Bird Arena.  Famous for chicken fights, Maggard envisioned turning the facility into a state-of-the-art body shop.

Business was good at Bullskin, which was located next to his home, but he needed more room and wanted quicker access to the Hal Rogers Parkway.

As work began renovating the building, Maggard, his father James Charles, commonly known as “Turkey”, noticed a man would come from towards Red Bird River and walk by the shop.  One night while working late with his father, Kevin noticed what looked like a fire under the bridge.

“I said dad is that a fire,” Maggard said while recalling the story.  “We walked over there where we found a man living under the bridge.”

Kevin soon discovered he knew the man he’d seen walking from the bridge by his shop—it was his old Big Creek Elementary classmate Daniel Horn.

Each day as Horn came by the shop Maggard made an effort to talk with him.

“At first he was shy about talking and wouldn’t look at me or any of the other guys that works here,” he said.  “The more we tried the more he started to warm up to us.”

Horn, 45, grew up on Big Creek and has lived a hard life, according to Maggard.  Horn had an abusive parent and was in and out of foster homes his entire life.

“When we were in elementary school, he told us about how police would be at the school all the time to take him to a different foster home,” Maggard said.  “I remember from school that he grew up hard.”

The abuse continued all of Horn’s life and at the age of 20 his father shot him in the right shoulder and side with a shotgun.  Horn showed us the scars on his body from the shooting and abuse.

Maggard says Horn then turned to a life of drugs which included methamphetamine abuse.  The lifestyle caused numerous mental issues to the man on top of what was already pre-existing from his childhood.

“We simply cannot imagine what Daniel went through growing up,” Maggard said.  “People used Daniel as guinea pig, even in the medical field.  They started his drug addiction.”

As time passed, Horn slowly began to frequent the body shop.  Maggard said anyone couldn’t help but feel sorry for him, so he began to ask a lot of questions.

“I found out he was drawing a little over $700 a month but people were stealing his money each month,” he said.  “Every time Daniel would try to use his card there wouldn’t be any money on it.”

After a while Maggard said he found out who was stealing the money and Daniel lost all of his government assistance.

“He has no income now,” Maggard said.  “But that’s what it took to keep people from stealing from him.  My wife Cindy and I have taken him to the doctor and have a few more visits remaining and hopefully we can get his benefits back.”

No money equaled no food for Horn each month.  Maggard, with the help from his father and mother, Sherry Gail, began to feed Daniel each day.

“We always make sure he’s got something to eat, and we keep him snacks here at the body shop as well,” he said.

But it wasn’t easy getting Horn to accept his newfound friends that expected nothing in return.

“He’s been used by so many in his life he didn’t know how to react to someone showing him kindness,” Maggard said.  “That was hard for Daniel to understand.  Can you imagine never seeing kindness in your life?”

Maggard’s Auto Body Shop took Daniel under their wing and bought him a new bicycle, boots, clothes and did something for him no one had ever done before—they took him to a restaurant.

“We took him to El Cazador’s Mexican Restaurant, and he didn’t know what to think,” Maggard said.  “He told us he had never been anywhere like that before.”

The bond of their friendship over the last several months has grown stronger and stronger.   Daniel now leads a drug-free lifestyle, according to Maggard.

“He had no choice but to stop using drugs really,” he said.  “He had no money and no way of buying drugs.”

Horn’s transformation has been so inspiring Maggard started updating his progress on social media.  An outpouring of love from the community started coming for Daniel.

“People have been helping us out with Daniel,” Maggard said.  “You’ve got to understand, this man has nothing.  Zero.  The only things he had where things people had thrown away and he found in the garbage.”

Maggard and his family have been so moved by Daniel’s transformation they started a project to build him a home.

“We have a small area next to the body shop where he walks to get under the bridge, so we decided to build him a house there,” Maggard said.

Volunteers Travis and Heather Smith from Pulaski County were helping build the home during the interview for this story.  The couple said they are friends with Maggard and had been following the progress on Facebook.

“We have a similar situation like the one with Daniel that we work with,” Travis said while hanging insulation on the walls of the 12x20 home.  “Heather and I knew this were something we needed to help Kevin do.”

The outpouring of love for Daniel hasn’t stopped there.  Maggard says others are donating and volunteering their time.

“Kemper Furniture in London is donating furniture for the home,” he said.  “So many people have given us materials, sold us things at their cost and shown so much love for wanting to help Daniel.”

Young and Son Trusses donated the trusses for the home, Maggard said.

“None of this would be possible without people helping us,” he said.  “There’s just no way we would be able to undertake a project like this without help.”

Daniel watched as Maggard Body Shop employees, along with the Smith’s, worked throughout the day Thursday on the home.

When asked what he thought about all this, Daniel just lowered his head.

Daniel said he looks forward to a day he has a bed to sleep in and not have to worry about his belongings when he leaves home.

“Every time I leave people steals my stuff,” he said while pointing back under the bridge where he sleeps.

“So many, too many to even imagine, has took advantage and mistreated Daniel his entire life,” Maggard said.  “Little things like love and kindness, he’s never been shown.”

Maggard bares the majority of the expense for Daniel’s well-being now.  Days like this, he pays his employees to help with the home instead of doing auto repair.

“I do it because I love him and I know he needs a chance in this life,” he said.

The home is not complete and if you’d like to help, Maggard said anything is appreciated.

“I can promise you this, anything you want to do to help with this project goes for Daniel, nothing else,” he said.

When asked what he needed most, Maggard says money to buy building supplies.

“That’s what Daniel needs the most right now to complete this before it gets cold,” he said.

Worth the Risk? After pardon from 19-year sentence, Baker to serve 39.5 years in federal prison