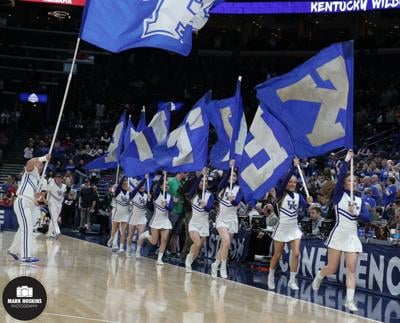 LEXINGTON — The University of Kentucky announced on Monday actions to protect students and ensure the integrity of the nation’s premier collegiate cheerleading program.

A three-month investigation found the coaching staff and administrative advisor failed to provide reasonable oversight during off-campus events, where inappropriate conduct by members of the cheerleading squad included hazing activities, alcohol use and public nudity.

In response, the University of Kentucky today dismissed all four cheerleading coaches — Head Coach Jomo Thompson and Assistant Coaches Ben Head, Spencer Clan and Kelsey LaCroix — from their duties with the program.

“A commitment we make and renew every day at the University of Kentucky is that the success of our students is at the center of everything that we do. But for that sentiment to be more than words, we must always act in ways that honor that commitment — especially when we discover rare instances where those who supervise and guide our students don’t meet the standards of integrity we expect of each other. This is one of those times,” said UK President Eli Capilouto. “The University of Kentucky has built the nation’s premier collegiate cheerleading program. But regrettably, the integrity of the program has been compromised by inappropriate behavior by some squad members on off-campus trips and by lax oversight by the program’s coaches and advisor.”

“The advisor and the coaches failed to stop a culture of hazing, alcohol use and public nudity at off-campus activities where they were present,” said Eric N. Monday, UK’s executive vice president for finance and administration. “Our students deserve more responsible leadership and the University of Kentucky demands it.”

Monday said he has assigned oversight of the cheerleading program to University of Kentucky Athletics to provide more rigorous control and accountability.

Athletics Director Mitch Barnhart made the decision to discharge the cheerleading head coach and remove the assistant coaches from any association with the program consistent with the conclusions of multiple reports, including those by the Office of Institutional Equity and Equal Opportunity, by the Office of Student Conduct, and a jointly authored report that included input from an expert outside UK with expertise in employment law.

Barnhart has directed Sandy Bell, executive associate athletics director to lead the program, including the hiring of a new coaching staff. A national search will be conducted for a new coach.

“This must be a championship-level program both on and off the court and playing fields,” Barnhart said. “And as with all our sports, that will be our goal — every day.”

UK’s cheerleading program has won 24 national championships in the past 35 years and developed hundreds of outstanding students.

Monday said the investigation began in early February after a call from a family member of a cheerleader alleging inappropriate conduct by squad members and inadequate oversight by coaches during off-campus trips.

University leaders acted early in the investigation to increase oversight and limit contact between the employees under investigation and cheerleaders.

Coaches knew or reasonably should have known of inappropriate conduct by cheerleaders and failed to take sufficient steps to address the conduct;

During a team retreat at Lake Cumberland, some cheerleaders performed gymnastics routines that including hurling their teammates from a dock into the water while either topless or bottomless. The routines, known as “basket tosses,” were done at the direction of other members of the squad and within the view of at least some of the coaches;

Coaches allowed cheerleading alumni to bring boats and alcohol to the retreat, where some cheerleaders were partially naked and/or drinking while riding on boats;

Coaches did not confiscate alcohol brought to the retreat by some squad members or intervene to stop students from consuming alcohol. Several squad members became so intoxicated they required medical treatment; and

During a cheerleading camp in Tennessee, some cheerleaders were directed by other members of the squad to perform lewd chants and wear outfits that did not include underwear.

The investigation found no evidence of sexual assault or sexual misconduct during these trips.

“We place the safety and health of our students above all other priorities as a university,” Blackwell said. “We cannot truly have a championship cheerleading program if we do not protect the health, safety and well-being of our students.”

As UK Athletics takes control of the program, Bell said inappropriate behavior by the cheerleading squad will not be allowed.

“The annual retreat will be eliminated, and all off-campus trips will be closely supervised,” Bell said. “Cheerleading squad members will be held to the same standards as all our student athletes. It’s a new day for UK cheerleading.”

Athletics officials are meeting today with current members of the current squad to share the news and discuss the timeline for hiring and tryouts.

UK Athletics will immediately begin the national search for a new head coach, who will be part of the selection of assistant coaches and the 2020-21 team members this summer.

The investigation reports and other documents can be accessed at https://www.uky.edu/prmarketing/reports-and-other-materials.