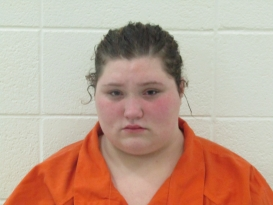 Laurel County Sheriff John Root is reporting that: Laurel Sheriff's Sgt. John Inman along with Deputy James Fox, Deputy Justin Taylor, and Deputy Landry Collett arrested Samantha S. Lewis age 20 of London early Tuesday morning May 19, 2020 at approximately 4:44 AM. The arrest occurred off Tom Cat Trail approximately 4 miles east of London after deputies were dispatched to a disturbance complaint there. Upon arrival at the scene deputies conducted an investigation and learned that the female victim who was located two houses away had allegedly been struck over the head with a vacuum cleaner. While deputies were at the scene the suspect created a disturbance belligerent and cursing and upon arrest attempted to kick one of the deputies there. Samantha Lewis was charged with assault – 4th   degree; resisting arrest; disorderly conduct – second-degree; menacing. This individual was lodged in the Laurel County correctional center. Photo of accused attached is courtesy of the Laurel County correctional center .The victim was taken to St. Joseph Hospital London for Treatment of injuries.