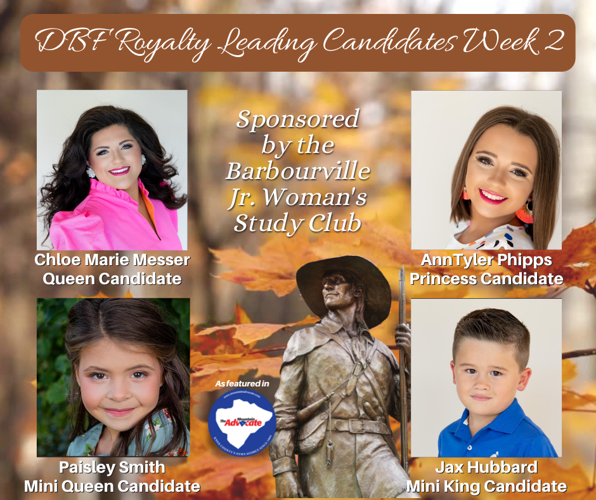 In the 2022 miniature queen race, the leading candidate is Paisley Nicole Reese Smith.  Paisley is the daughter of Roy and Hannah Smith of Heidrick. Paisley attends Central Elementary School where she is enjoying school, being on the little panthers dance team and learning with her friends.  Her hobbies include swimming, singing and playing with her sisters. Paisley’s future plans are to win America’s Got Talent.

In the 2022 miniature king race, the leading candidate is Jax Hubbard.  Jax is the son of Alvin and Jenny Hubbard of Gray.  Jax attends GR Hampton Elementary where he is enjoying being on the Little Dribblers basketball league as well as playing flag football and baseball.  His hobbies include deer hunting with his dad and doing anything outside.  Jax’s future plans are to own and operate his daddy’s business “Hubbard’s Cabins”.

In the 2022 princess race, the leading candidate is AnnTyler Phipps. AnnTyler is the daughter of Jeffery and Beth Phipps of Gray.  AnnTyler attends Jesse D Lay Elementary School where she is a member of the cheer team and the basketball team. Her hobbies include tap, dance, ballet and spending time with Ava, Willa and Aria. AnnTyler’s future plans are to become a pediatric nurse.

In the 2022 queen race, the leading candidate is Chloe Marie Messer. Chloe is the daughter of Ronnie and Samantha Messer of Barbourville. Chloe attends Barbourville High School where she is a member of the choir, pep section, and the media and yearbook club.  Her hobbies include going on cruises, camping, NASCAR races, baking, working at Lillian Junes and spending time with her family and friends, especially her boyfriend Matthew. Chloe’s future plans are to become a diagnostic medical sonographer.

The 2022 Daniel Boone Festival Royalty Coronation will be held Monday, October 3, at 7:00 pm, at Knox County Middle School.  Everyone is invited to attend.  Admission is $5.00.  The GFWC KY Barbourville Junior Woman’s Study Club would like to thank everyone for their continuing support as we work together to better our community.