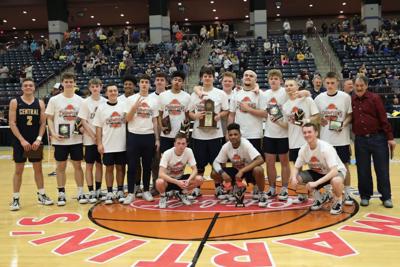 After releasing a press release that indicated the boys’ and girls’ state basketball tournaments had been officially canceled, the Kentucky High School Athletic Association announced on Twitter that it still hopes to play.

“No change in official status of boys and girls state basketball events! Remain postponed. Events had to be ‘canceled’ through Ticketmaster to permit refunds. When a final determination is made, schools will be first to know,” the KHSAA said on Twitter.

The Kentucky High School Athletic Association has announced that its boys’ and girls’ state basketball tournaments will not be held as a result of the steps being taken in Kentucky and around the world to deal with the coronavirus pandemic.

“We know that many of you are as disappointed as we are,” the KHSAA said in a statement released Wednesday afternoon. “ You had planned for months on the annual celebration of basketball in our commonwealth. And while the cancellation represents nothing less than a financial disaster for the association, finances certainly could not be the determinant in our action steps. The safety of everyone involved was and continues to be our number one priority.”

The girls’ tournament was stopped after five games had been played last week and the boys’ event was put on hold as the extent and seriousness of the coronavirus outbreak began to be digested by health officials and state governors. At the time, KHSAA officials were hopeful they might be restarted once the crisis passed. Since those announcements, even more restrictions on public gatherings have been put in place to safeguard the community.

“Today should have been a day of celebration. Newly crowned Mingua Beef Jerky/KHSAA girls’ state tournament champions and other participants should have been celebrating in their local communities. Downtown Lexington and the entire state should have been abuzz as the Whitaker Bank/KHSAA Boys’ State Basketball Tournament played its first round,” the KHSAA said. “But such was not to be the case. Events totally beyond the control of everyone involved led to the determination that it would not be safe to conduct the remainder of the Mingua Beef Jerky girls’ event or conduct any of the Whitaker Bank boys’ event.”

The KHSAA’s statement also outlined ways to get refunds for already-purchased tickets or request a donation receipt for them to help the KHSAA deal with the loss of its biggest revenue event.