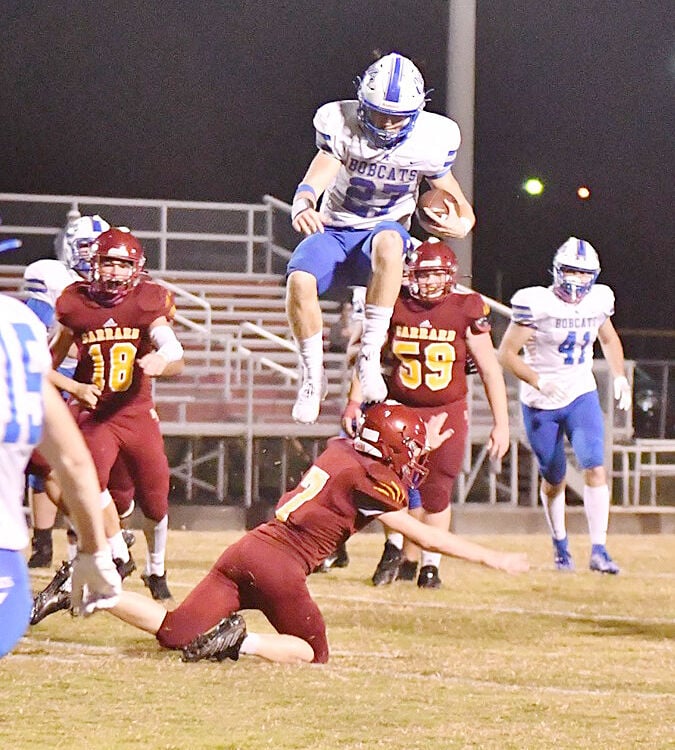 Brandon Baker leaps over a Garrard County defender on his to a big gain during action in Friday’s game. Baker ran 19 times for 191 yards and three touchdowns in the Bobcats’ 27-0 win. 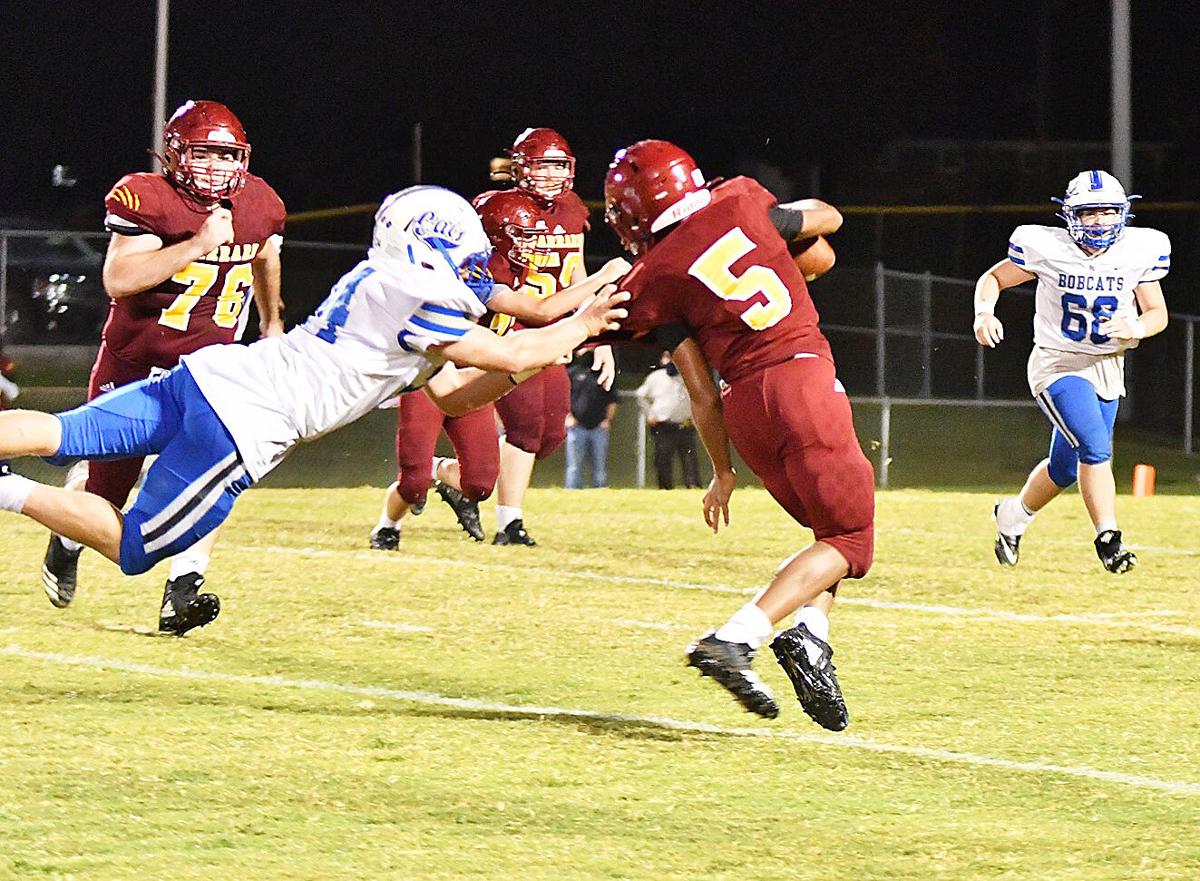 Sophomore linebacker Jonathan Beverly dives from out of nowhere to for a sack during action in Friday’s game.

Beverley finished with four tackles and two sacks. In all the Bobcats registered five sacks in Friday’s shutout win.

Brandon Baker leaps over a Garrard County defender on his to a big gain during action in Friday’s game. Baker ran 19 times for 191 yards and three touchdowns in the Bobcats’ 27-0 win.

Sophomore linebacker Jonathan Beverly dives from out of nowhere to for a sack during action in Friday’s game.

Beverley finished with four tackles and two sacks. In all the Bobcats registered five sacks in Friday’s shutout win.

The Bell County Bobcats bounced back from a disappointing loss at Rockcastle County with a superb defensive effort and three touchdowns from junior Brandon Baker in a 27-0 win at Garrard County on Friday.

With both teams keeping the ball on the ground and moving the ball steadily, the first half flew by. Neither team scored until senior receiver Chandler Mink hauled in a 21-yard touchdown pass from junior Cameron Burnett with under four minutes to play in the half. That put the Bobcats up 6-0.

They survived Garrard’s best drive of the game on the following possession and stopped them at the 1-yard line just before halftime.

“We had two good goal line stands,” Bell County coach Dudley Hilton said. “I think they had the ball five times and we stopped them inside the red zone twice, they had to punt once, they turned it over once and they ended the game on the other.

“We had it five times, didn’t score on the first one but scored the next four. We looked a lot better offensively, kind of mixed some things up. We didn’t throw the ball a lot, it was a ball-control game and it was over with before you knew it. I really thought we played a lot better.”

Baker took over in the second half. The junior finished wth 191 yards and three touchdowns on 19 carries as the Bobcats pulled away for the 27-0 win.

“Brandon really got into a zone and got to running good. I think his last four carries he got about 100 yards,” Hilton said. “We had plans to run the other boys several times but it just didn’t pan out like that. We’re there to win a game, not to pad anybody’s stats.

The Bobcats rolled up 284 rushing yards in total and the 21-yard touchdown was Burnett’s only completion in two attempts.

Leslie was held to 186 rushing yards and 41 passing.

“That was the first time we’ve played there and it was a nice atmosphere. Garrard County has a nice football field. Any time you go 140 miles away you’re just gald to come out with a win. It was nice to get a shutout, too,” Hilton said.

Leading the way in the shutout was senior outside linebacker Dawson Widener with 8 tackles, including three for loss and a sack. Senior defensive back Brant Hoskins was in on seven stopps and also defended two passes.

Bailey, Baker and Ethan Raby all had six tackles with Raby forcing a fuble. Tyson Thomas also forced a fumble and Tucker Hunley recovered a fumble for the Bobcats.

Beverly added four tackles and two sacks and Daniel Thomas had a sack as well.

“Of course our defense came up big when we had to. I think we stopped them right before halftime on the one-yard line,” Hilton said. “That’s what we’ve been working on is our defense inside the 10. I think everyone who has scored on us this year has scored from inside the 10, we helped ourselves on that.”