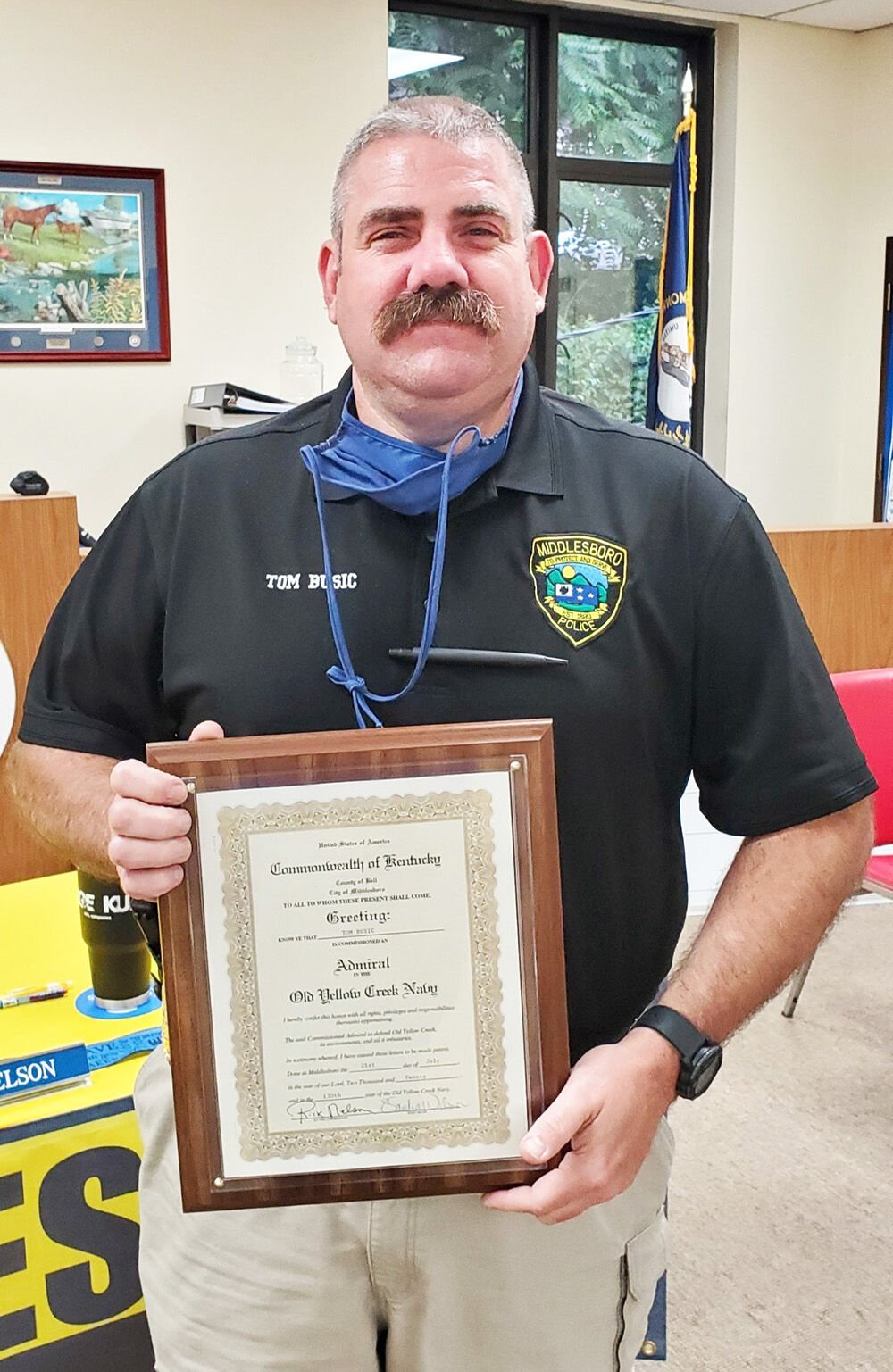 Retired Middlesboro Police Chief Tom Busic with his plaque for being named an Admiral in the Old Yellow Creek Navy. 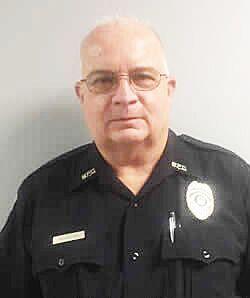 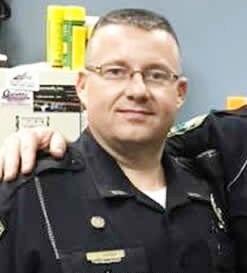 Joe Holder has been promoted from lieutenant to captain.

Retired Middlesboro Police Chief Tom Busic with his plaque for being named an Admiral in the Old Yellow Creek Navy.

Joe Holder has been promoted from lieutenant to captain.

It is a bittersweet day for the City of Middlesboro as they say goodbye to Middlesboro Police Department Chief Tom Busic.

His hard work and dedication to the department have been insurmountable throughout the years has not gone unnoticed.

“I want to express my appreciation for the work that Tom Busic has done,” said Middlesboro Mayor Rick Nelson. “Not only for his twenty years of serving the citizens of Middlesboro, but foremost for the last year-plus that he has served as Chief.”

Busic was named chief after the prior chief took leave.

He has been a tremendous influence on the police force, the men love him, but they also respect him,” Nelson said. “They want to do good because of him. So, he will be sorely missed but the short time he was here as chief is going to be a benchmark for all the other folks that follow him. So, he’s going to be missed but we respect his decision after twenty years of a stressful job of wanting to do something else.”

Busic has served the City of Middlesboro for 20 years as a police officer.

“Well, twenty years it’s just kind of, you know, get to where there are certain points of your career and you are getting burnt out and you start really looking forward to, Chief Busic said. “Then when it gets here, it’s hard to go.”

Busic says that it is hard leaving the people but he is looking forward to spending time with his family.

“In twenty years, I’ve been around the department more than I have my family,” Busic said.

Busic said that when he was younger, he had the mindset that he was going to be a police officer just like his dad, who was also an officer with the Middlesboro Police Department.

“My dad started here around ‘61 and he ultimately retired from the police department here in 90,” Busic explained. “So, you know, growing up I was around that and I can remember when I was a little boy going to the station and seeing everybody. So, I wanted to do it but then as I got older, I became a respiratory therapist and did that for about seven years and while we were in Florida, my wife was in school down there and it got back on my mind to get back into this. So, when I came back is when I applied for the department here and I got hired later on that year. So, then I went to the Academy and I’ve been here ever since.”

Following the Academy, Busic held several titles that ultimately led him to Chief of the Middlesboro Police Department.

When Busic took the title as chief, he was still running a shift along with carrying the chief title.

Unfortunately in January, Chief Busic began a foot pursuit on a suspect and during the pursuit, he tore his achilles heel.

“I’ve been working in the office ever since,” Busic said. “They released me on the condition that I still stay in the office. So, my chasing days are over.”

Busic was appointed chief in March 2019 and said that it was a steep learning curve but has learned as each day passes.

“It has been really great working with the Mayor and the Council, they have been really supportive and they have allowed us to be able to hire more people to build the department back up,” Busic said. “In fact, we are getting ready to order several new cars to update our fleet. So, we are making some real progress.”

Chief Busic discussed the trials that have accompanied COVID-19 and what his department has done to respond to it.

“Unfortunately now, we are more in a reactive mode than we are a proactive mode,” Busic explained. “We have to use caution with everybody we get around and try to maintain distance but with this job you can’t really do that. So, we just have to kind of isolate ourselves from each other here, we wear masks here in the station so if one of us gets it we hopefully won’t infect the others.

Many officers within the Middlesboro Police Department have expressed to Chief Busic that although they support his decision, they are going to miss him.

“Tom is a very good supervisor and what we are losing is a big asset,” said Officer Joe Quillen. “Not only are we losing somebody that is a good supervisor but since he’s taken over as Chief Tom is very strict, he’s very organized. He’s not the type that forgets stuff. If you ask Tom, ‘Hey, I need this, this, and this,” you can forget about it and he will get you taken care of, there’s not many people that do that.”

During his time as Chief of the Middlesboro Police Department, Busic als gave several ner deputies the opportunity to be in law enforcement.

“I didn’t get to work a lot with Chief Busic because his injury happened right when I got hired on but I feel like anytime I needed to come to him, he always gave the best advice and he was ultimately the one who hired me and three other guys at the same time so he actually gave me my real start in law enforcement, so I am forever grateful to him for that,” expressed Officer Brad Fuson.

Officer Kenny Vanover has spent his career at Middlesboro and hopes to one day retire from the department but doesn’t see himself reaching heights as Busic.

“I plan on retiring here but Tom’s footsteps, those are big shoes to fill,” Vanover said. “I don’t know if I could ever fill his shoes or his mustache. He’s a one of a kind when it comes to that. He’s the man. I treasure his advice, I’ll take whatever he says to the bank, he’s the bomb.”

At the July meeting of the Middlesboro City Council, Busic was given the highest award that is given within the City of Middlesboro. Tom Busic was named Admiral in the Old Yellow Creek Navy.

Admiral in the Old Yellow Creek Navy which is the highest award that the City of Middlesboro has.

Mayor Rick Nelson has appointed two individuals to be promoted as Mr. Busic vacates his position as Chief.

Life long resident Michael Orr has stepped  into the interim Police Chief position on Monday July 27, 2020 and will be sworn in officially at a later date. He has been transitioning into the position with the assistance of Chief Busic. Michael was initially hired as a police officer in January of 1982. He attended the Department of Criminal Justice Training from January to March of the same year.

His career continued for over 20 years with the Middlesboro Police Department starting as a Patrolman onto Sergeant, then lieutenant. Still being active in law enforcement, Micheal served 9 1/2 years as a Victim Advocate with Bell County Commonwealth Attorney Karen Blondell. After several years of retirement, Michael was once again hired by Mayor Nelson in March of 2019 where he is currently serving Middlesboro.

Also being promoted is Joe Holder from Lieutenant to department Captain. Joe started with the department in May of 2003 and was later assigned to narcotics investigations in January of 2007.

He was promoted to Sergeant Investigator in October of 2010 and continued his work in investigations until promoted to Lieutenant in July of 2019. Joe has lived in Middlesboro for most of his life and enjoys serving his community. He has a 14 year old son named Will Holder.