Skip to main content
You have permission to edit this article.
Edit
Subscribe
Our Publications
Home
News
Sports
Opinion
Digital
Classifieds
Advertise with Us!
e-Edition
1 of 5

The Middlesboro Yellow Jackets pose with their trophy after Friday’s 33-6 win over West Carter in their Class 2A Regional Chapionship game. Middlesboro advances to play Lexington Christian this Friday at 7 p.m. in the state semifinals. 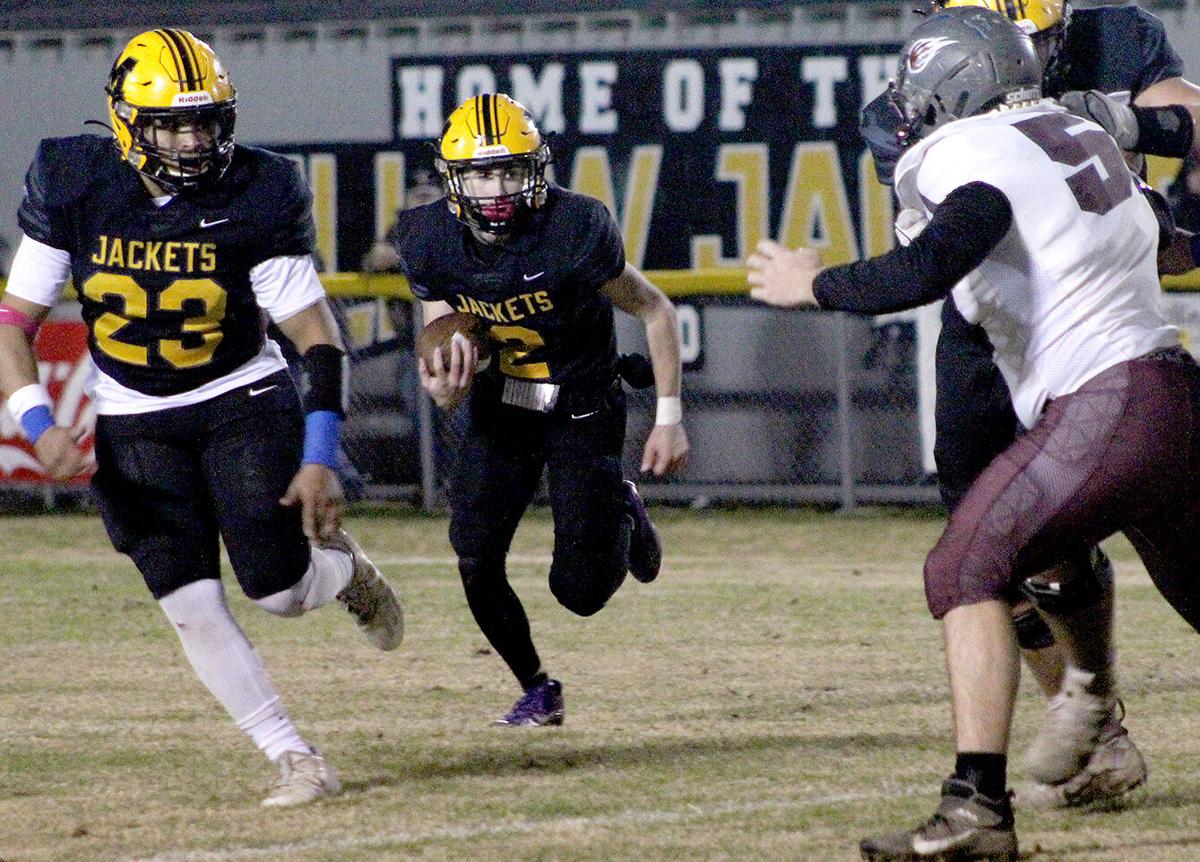 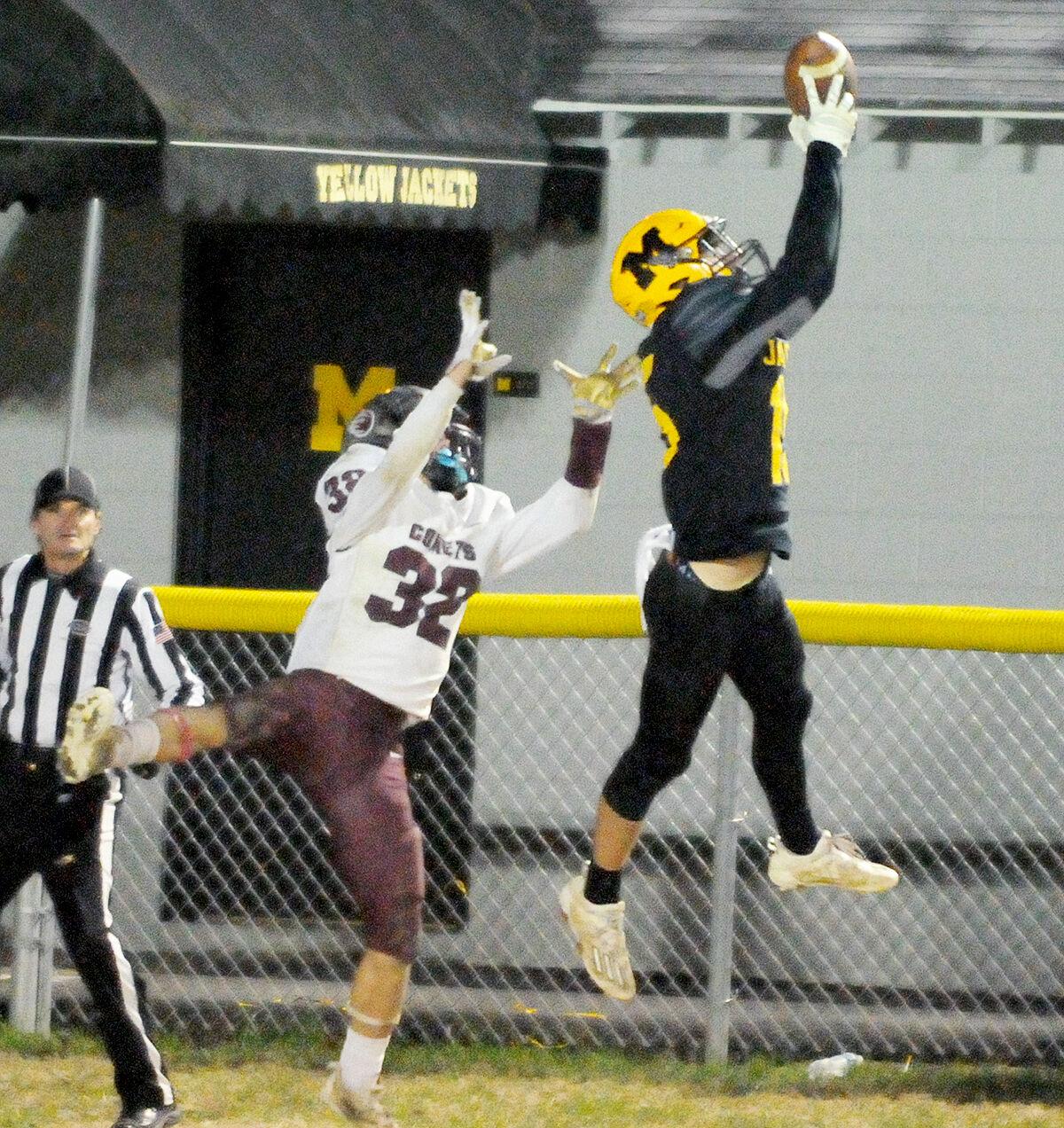 MHS senior defensive back Will Smith leaps up in front of a West Carter receiver for an interception along the sideline during action in Friday’s 33-6 win in the Regional Championship game. Smith had two interceptions and broke up two other passes in the contest. 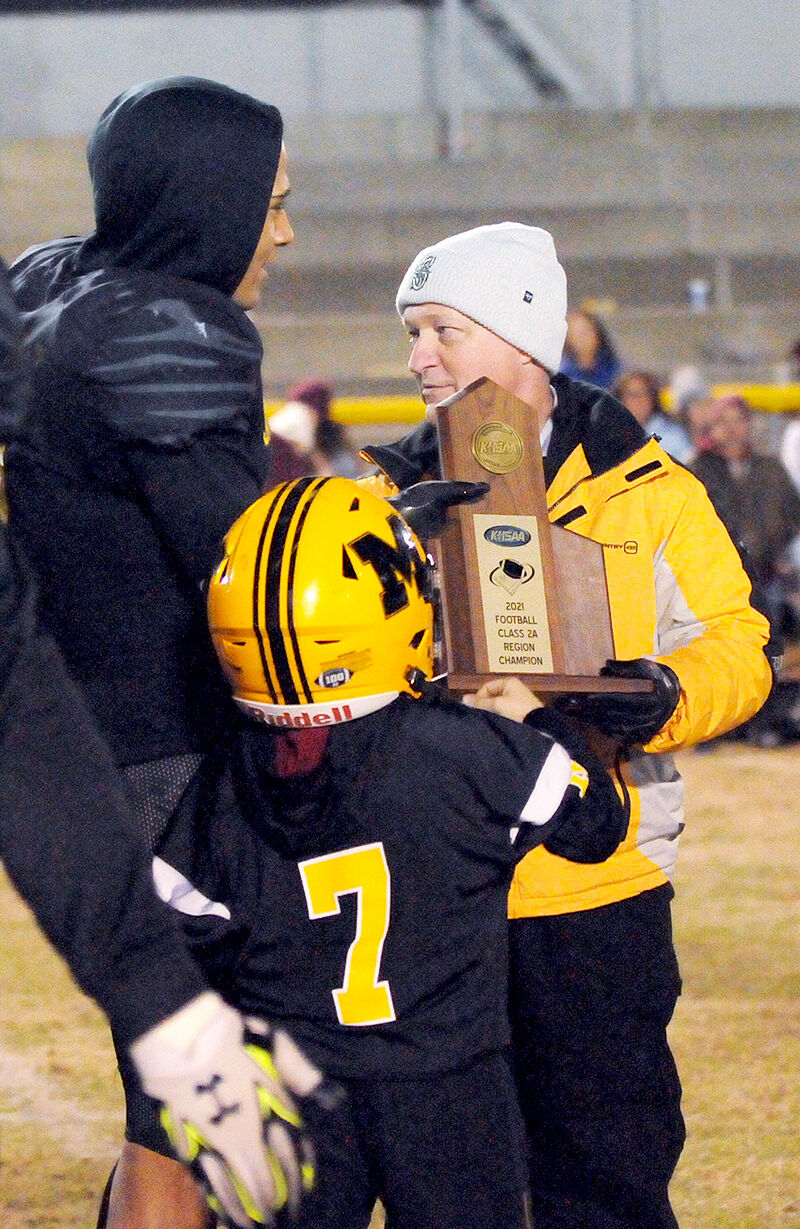 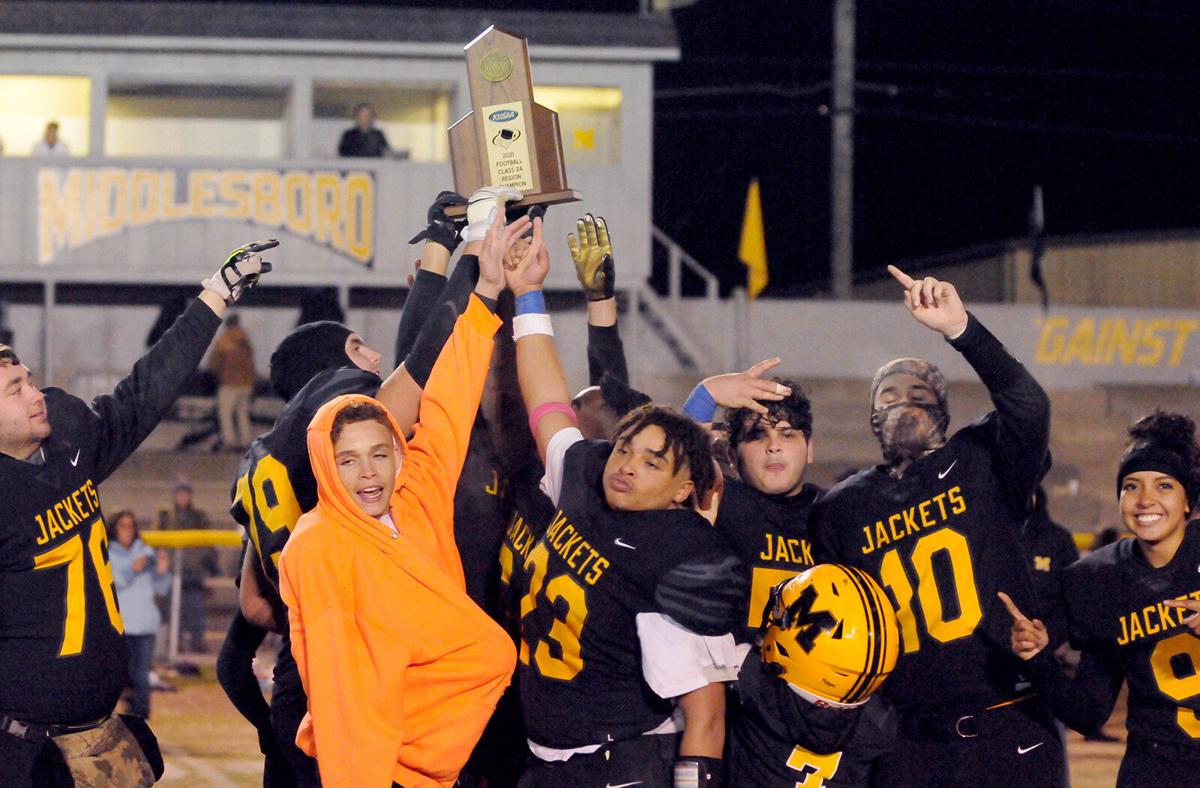 The Yellow Jacket seniors hold up their Regional Championship trophy for the home fans to see during the celebration after Friday’s 33-6 win over West Carter.

The Middlesboro Yellow Jackets pose with their trophy after Friday’s 33-6 win over West Carter in their Class 2A Regional Chapionship game. Middlesboro advances to play Lexington Christian this Friday at 7 p.m. in the state semifinals.

MHS senior defensive back Will Smith leaps up in front of a West Carter receiver for an interception along the sideline during action in Friday’s 33-6 win in the Regional Championship game. Smith had two interceptions and broke up two other passes in the contest.

The Yellow Jacket seniors hold up their Regional Championship trophy for the home fans to see during the celebration after Friday’s 33-6 win over West Carter.

The Middlesboro Yellow Jackets are headed to the state semifinals for the first time since 1999. And they did it in style, dominating both sides of the ball in Friday’s 33-6 win over West Carter to win the Regional Championship.

“It’s just about as big a win as you can get right now and we’re going to enjoy it,” MHS coach Larry French said after the game. “I thought our kids played extremely hard tonight and extremely well on both sides of the ball.”

Meanwhile the Jacket defense played their best game of the season, holding West Carter to under 100 yards of total offense in the game.

Cole Crampton, Class 2A’s leading rusher this season, was held to just 47 yards on 17 carries. The Comet passing attack was also shut down as Eli Estepp completed just four of 17 passes for 46 yards and was picked off four times by the Jackets.

“Defensively they played great. They shut down (Crampton) quite a bit and they shut down number 22 quite a bit. I think Coach Massengill had them pegged, he had them down on paper and the kids executed the game plan,” French said. “Offensively we made some big plays, big catches and big runs out there. I’m proud of our young people, they’ve come a long way. It’s good for our school, good for our team and good for this community to get a regional championship.”

The tone was set early as the Jackets took the opening kick and needed just three plays to go 74 yards. Grigsby ran for 10 yards around the right side, then Bogonko started to his right and reversed field in the backfield. He picked up a block and got around the left side for a 34-yard gain to the Comet 30. Then Bogonko broke a tackle near the line of scrimmage got to the sideline and went 30 yards for a touchdown. Jordyn Ferguson’s kick put Middlesboro up 7-0 with 10:53 to go in the first quarter.

The defense also set the tone in their series on the field. Yousiff Nabat met Crampton in the hole on the first play and dropped him after a short gain. Then it was West and Zach Tong getting into the backfield to throw Crampton for a loss.

Estepp looked to have a first down completion over the middle but Spencer Wheeler laid a big hit on the receiver to jar the ball loose and force a punt.

It was more of the same on the next West Carter possession with Tyler Kelly getting into the backfield to stop Crampton for a loss and and an incomplete pass forcing another punt.

The Jacket took over at the 47 and went 53 yards on nine plays with Grigsby capping the drive with a tw0-yard touchdown to extend the lead to 13-0 with 44 seconds to go in the quarter.

“Our defense stepped up and did the job. We got control over the line of scrimmage early in the game, we tackled well and we were able to do what we needed to do,” French added.

Middlesboro took over on downs on their own 27 with just over nine minutes remaining in the half. Three penalties moved MHS backward before senior Eric Helton took a Grigsby screen pass and rambled for a 22-yard gain and a first down at the Comets’ 37. On 4th and three, Grigsby connected with West in the corner of the end zone for a 34-yard touchdown at the 3:39 mark.

Grigsby hooked up with West again for a 9-yard touchdown and Helton went up and got the conversion pass to extend the lead to 27-0 with 6:49 to play in the third quarter.

Kam Wilson had an interception for the Jackets, but the Comets picked off a Grigsby pass to get the ball back and they put together their only scoring drive of the game. Crampton scored on a seven-yard run on the last play of the third quarter and Foster intercepted the conversion pass to keep the score at 27-6.

West Carter recovered an onside kick at midfield but their drive was cut short as Will Smith intercepted a deep ball.

The Jacket offense turned to a heavy dose of Bogonko to keep the clock running and the senior scored on a four-yard run to make it 33-6 with 3:21 to play.

Smith picked off another deep ball with just over two minutes to play and returned it 43 yards out near midfield. From there the Jackets were able to run out the clock.

“We had four interceptions for the game. Will had two of them and, you know, Will has stone hands out there. They must have had glue on the ball,” French joked. “No, he played well. He broke on the football extremely well, he took the slant away from them and took the deep ball away from them.”

West Carter ends the season with a record of 9-4. Middlesboro (13-0) advances to face Lexington Christian Academy (13-0) in the semifinals on Friday at 7 p.m. The game will be played at Paul Laurence Dunbar High School.

“The community, the school and the kids are awful excited about the success that they’ve had. It’s due to the hard work that they’ve put in and the commitment they’ve had,” French said.  “Offensively, we’ve been putting up points all year long. We’re going to have to put up some points Friday night and that’s going to be a big challenge.”

The Middlesboro Yellow Jackets (13-0) will take on the Lexington Christian Eagles (13-0) on Friday at 7:00 p.m. in the Class 2A state semifinals. The game will be played at Paul Laurence Dunbar High School. The Eagles made it to the state championship game last season where they lost 24-23 to Beechwood. This year, they’re not only undefeated, they handed 4A power Boyle County their only loss and also have wins over 6A Madison Central and 1A Pikeville teams that are also playing in the semifinals this weekend.

Coach French: “They’re awfully good on both sides of the football. I think they might be one of the top two or three teams in the whole state. If we’re going to compete with them we can’t make mistakes — we can’t get foolish penalties, we can’t turn the ball over, up front we have to block the right people and we have to be able to tackle. They’re going to run through arm tackles, those back are very good. They can throw the football, they give you a lot of different looks and if you line up wrong it will cost you. They’re a good football team, there’s no doubt.”

Worth the Risk? After pardon from 19-year sentence, Baker to serve 39.5 years in federal prison