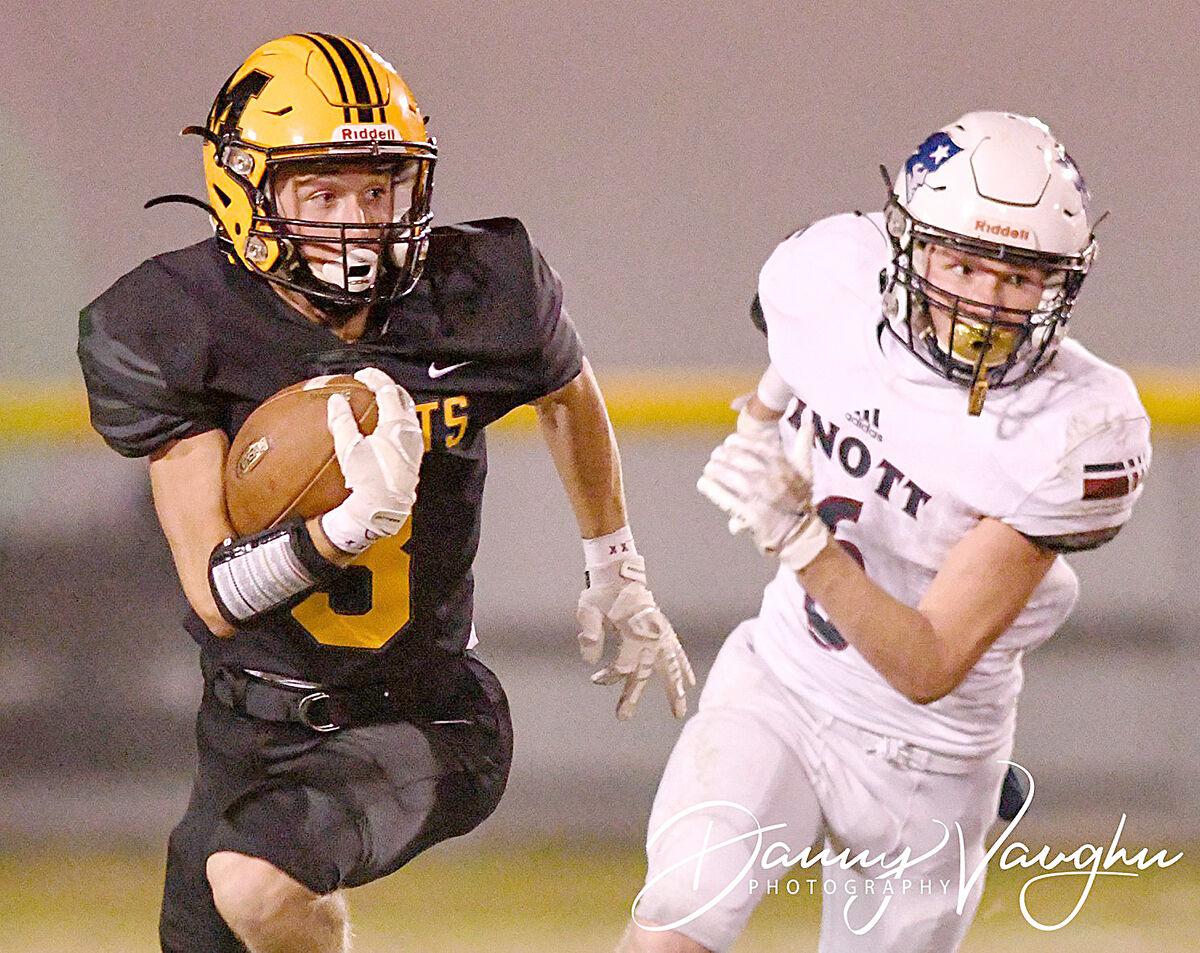 MHS senior Ethan Barton scored three touchdowns: one by running the ball, one by catching a pass and one by returning an interception 99 yards to lead the Yellow Jackets to a 52-6 win over Knott Friday. 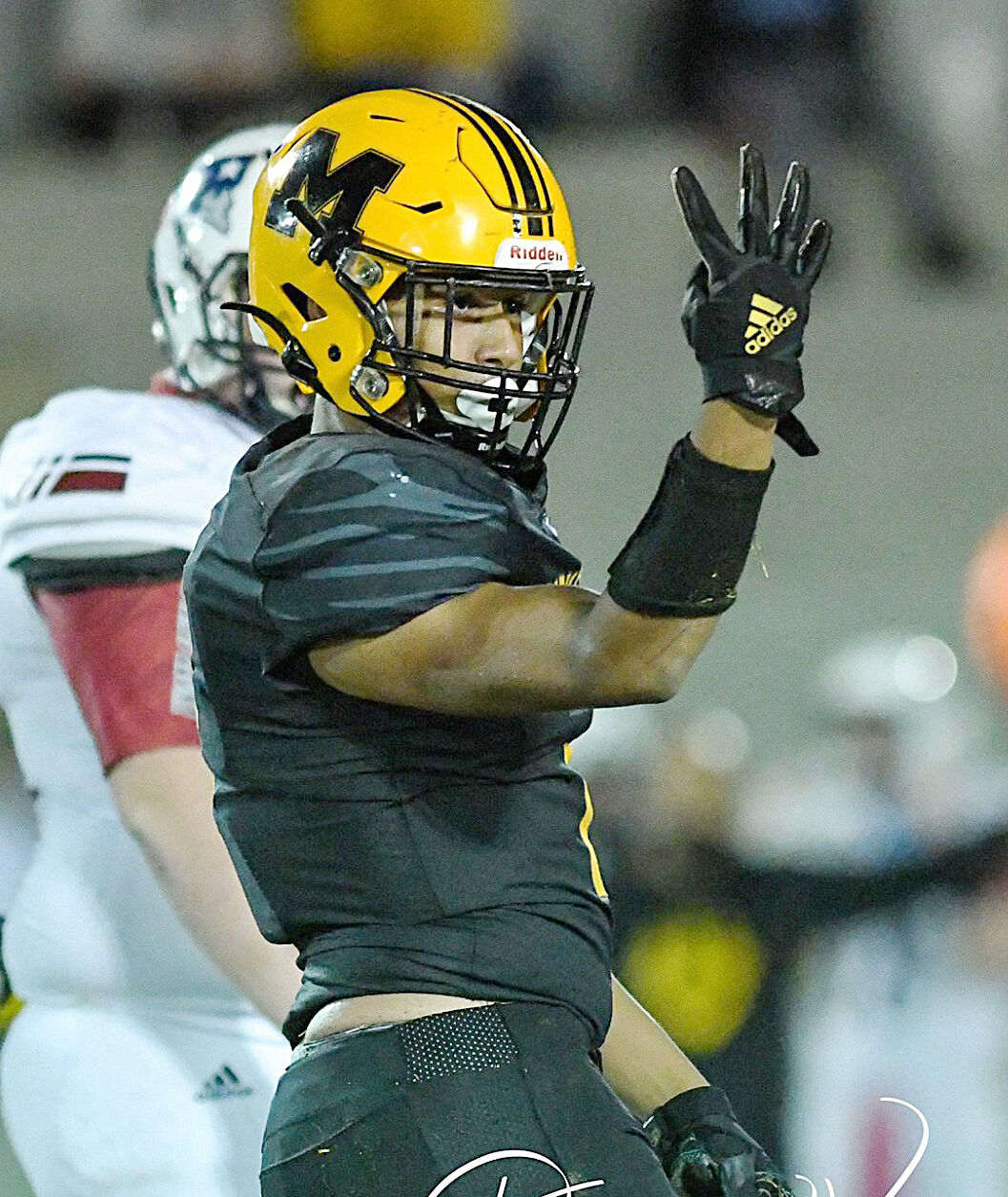 MHS senior Ethan Barton scored three touchdowns: one by running the ball, one by catching a pass and one by returning an interception 99 yards to lead the Yellow Jackets to a 52-6 win over Knott Friday.

The Middlesboro Yellow Jackets started fast and never stopped last Friday in a 52-6 win over Knott County Central. The win improves the Jackets to 5-1 on the season and 3-1 in district play.

Senior Ethan Barton did a little bit of everything for Middlesboro.  He ran for 26 yards and touchdown, caught three passes for 82 yards and a touchdown and returned an interception 99 yards for another score in the game.

Barton opened the game with a nice kick return to set the Jacket offense up. Caleb Bogonko and Cayden Grigsby had long runs to set up Barton’s 19-yard TD run. The Jackets added the conversion for an 8-0 lead.

Middlesboro’s defense forced a three-and-out. Barton returned the punt to the Patriot side of the field and soon after the Jackets were in the end zone again and quickly led 16-0.

“We started fast and I think that was the key. We got a 16-0 lead on them before they could take a breath and that took the sail out of them real quick,” MHS coach Larry French said. “We handled them up front pretty well on both sides of the football and shut down their run. We did a decent job on the pass, gave up a couple long throws but that’s just part of it. We’ve got to get better back there.”

Bogonko finished with 116 yards and two touchdowns on five carries. Riley Gent and Case Bayless also had TD runs in the game.

The defense was paced by junior end Jay Tyler West. He not only led the team with seven tackles, he recorded four sacks.

“We were able to get some young people some playing time. Our second bunch took the ball down the field and scored on about an 80-yard drive. Case Bayless did a nice job running our offense and Yassain (Nabat) ran the ball well for us,” French said

“We had some good, positive things come out of Friday night’s game and hopefully we can build on it, go to Martin County this week and turn in a good football game. We can’t make a lot of mistakes because their the type of team with ball control  on their mind. They’ve been averaging over 300 yards per game offensively so we’ll have our hands full defensively.”

Martin County is 3-2 and has the last two weeks off due to COVID cancelations.

Last season the Cardinals surprised the Jackets with a 22-19 win.

“Martin County just ran the ball right down our throats last season. We weren’t expecting it to be a physical game and they turned it into a real physical game. They were big and their running backs ran the ball extremely hard,” he said. “They kept the ball the whole first half and we were playing catch up. We made an adjustment in the second half that helped us some defensively, but we never could get our offense lined out.