You are the owner of this article.
Edit Article Add New Article
Subscribe
Our Publications
Home
News
Sports
Opinion
Digital
Classifieds
Advertise with Us!
e-Edition 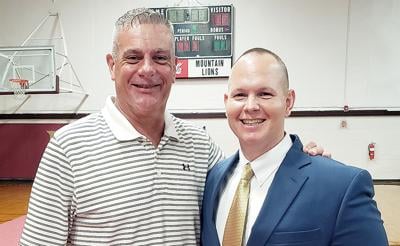 “It’s a great privilege of mine to be able to introduce somebody to you that we’re fortunate enough to hire here,” Frazier said in introducing Chappell. “We started working together in 2010 when I was a head coach and he was offensive coordinator, then he became a head coach and I was defensive coordinator. We’ve swapped back and forth about four times. I couldn’t have asked for any other coach in this day.”

Chappell and Frazier have a long history of working together with successful stints at Middlesboro and Whitley County in recent years.

They were at Middlesboro at the same as current Pineville superintendent Russell Thompson.

“Randy and I have been great friends for a long time as have Mr. Thompson and I,” Chappell said. “I feel very privileged and blessed to be at a place like this. The people make the place.

“I’ve coached for 21 years and been a head coach for 12 of those. I’ve won multiple district championships and been district coach of the year and I’ve also had years where I went 1-9.  I could go through each of those years and experiences but I don’t know that it would tell you a lot about me.”

He shared that his parents were divorced when he was young and he experienced a lot of instability while he was growing up.

“All through my childhood and even through my teens I never understood why my life was like it was. I just wanted to be normal and have a normal family,” Chappell said. “I have no doubt in my mind now that the Lord had me raised up that way so that I could help kids — help young men be better people because I can relate to those that have less than ideal home conditions.”

In addition to coaching, Chappell will serve as Pineville’s director of pupil personnel under the mentorship of Paula Goodin as well as teaching some high school physical education classes and being involved in youth athletic programs.

“I’ve know Mr. Chappell for a long time. I’ve worked with him and seen his interactions with students,” Thompson said. “I’ve told you all that I feel like it’s my job to get the best people in here and he’s one of the better people I’ve seen working with kids. I’m very proud and pleased to have Mr. Chappell here.”

Chappell said he was thrilled to be at Pineville.

“Mr. Thompson and I worked in the same classroom at Middlesboro and even at that time he would get teared up talking about Pineville. Through this process he’s gotten teared up a few times and I can tell you as an employee that makes it real easy to get on board,” he said. “When you know the leader has that much passion for where he’s at and you know where he stands and what direction he’s going, it’s fun to get on board with that mindset.

“To see what has happened with our town here over the last several years and see the revitalization that’s gone on downtown, people walking around. What a great place. It’s got to be a great place to live and raise your kids,” Chappell continued. “I’m happy to be at Pineville and I just thank you for giving me this opportunity. I’m ready to go to work and hopefully I can be a positive part of this.”

Frazier also shared that the football players and other athletes were able to start conditioning work with coaches on this week.

“(Monday) we started opening things back up as far as conditioning for our athletes. We have eight to ten students at a time out in the weight room with a couple of coaches,” Frazier said. “We’re taking temperatures and following all of the KHSAA guidelines. That’s good news that the kids get to see us and we get to see them.”