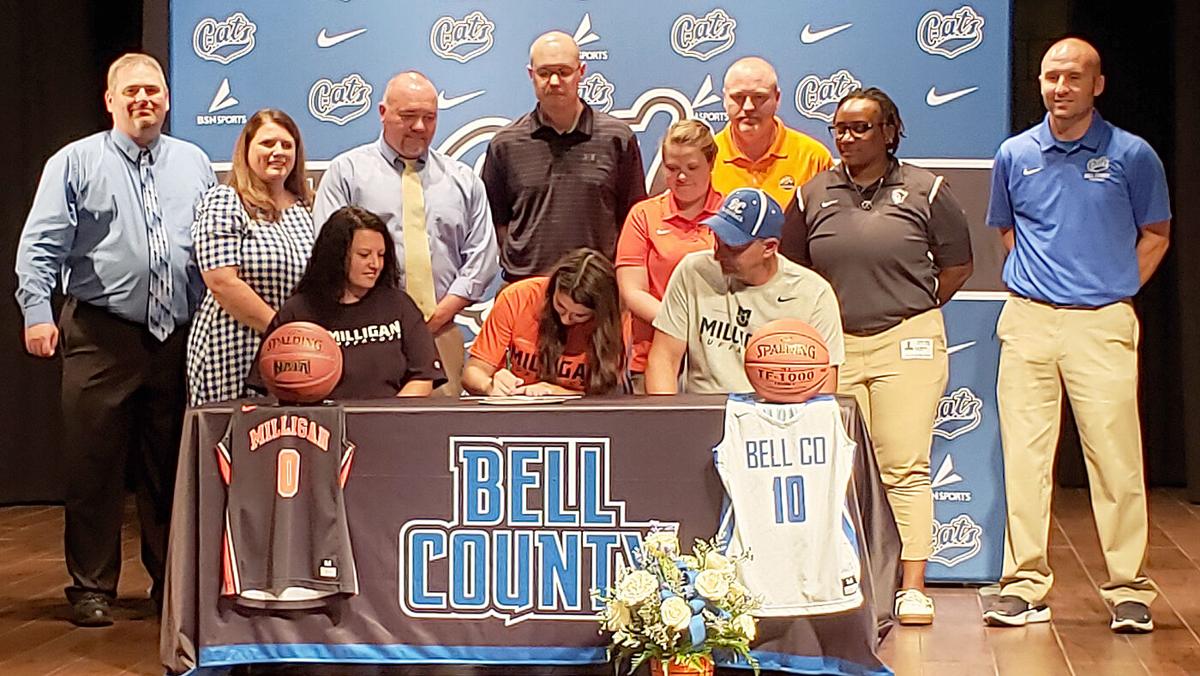 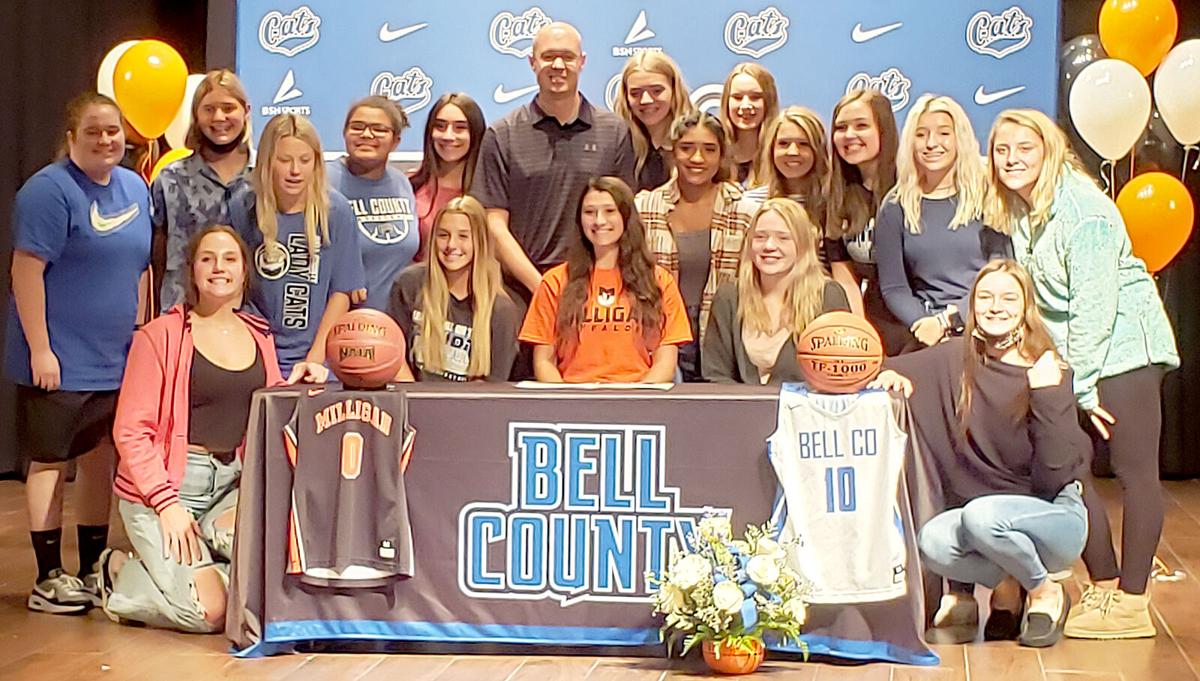 Ashtyn was joined on stage by Coach Teague and all of her Lady Cat teammates.

Ashtyn was joined on stage by Coach Teague and all of her Lady Cat teammates.

“It’s a big stress reliever for one, deciding where to go was probably the biggest decision I’ve made,” Meyers said. “Going to college and being a college athlete and knowing that is already set before my senior season is very important for me.”

Meyers has started for the Lady Cats since her freshman year and the team has gone 60-28 over the last three seasons, including a 25-5 and 22-5 marks the last two years. As a junior she averaged 13.1 points per game and hit 78 three-pointers while making 37.5-percent of her shots from beyond the arc. She set a 13th Region Tournament record by hitting nine 3s as Bell nearly came back to beat eventual regional champ South Laurel in the semifinals.

With all five starters from that game coming back, Ashtyn is excited about what the team can accomplish during her senior year.

“Just knowing what I have to look forward to with the rest of my high school team is insane. We’re going to be so good,” she said. “It’s kind of heart-breaking to see it go by so fast.”

Meyers credits countless hours in the gym putting up shots and working out with her teammates since her freshman year with making her into a college prospect.

“Knowing where I came from as a small child that really didn’t know what she was doing when she first came here. Now to go to college to play basketball is huge for me,” she said. “Not only is it a confidence booster, it’s just letting these other kids know that if you work hard and work at what you want you can achieve it.”

“She’s been a very big part of our basketball team over the past three years. She’s had a very good career so far. She’s set records not only at our school but within the 13th Region. She’s closing in on 1,000 points,” he said. “She’s been a pleasure to coach and obviously we’ve got one more season to go. We’ve got a lot of goals we want to get accomplished this year and I feel like we’re going to have a very good basketball team and Ashtyn is a big part of it. I appreciate every thing she’s done for me and the team. I’m proud of her.”

Milligan coach Kylie Greer said she was just as impressed with Ashtyn’s work in the classroom and off the court.

“When we recruit, we don’t move very far forward in the process until we know what they can do in the classroom. One of the reasons Ashtyn is able to go ahead and make this decision earlier than a lot of her peers is that she has her act together in the classroom.,” Greer said. “Something I loved getting to know about Ashtyn is her drive in her career. She wants to be a nurse and she’s excited to pursue that field and we’re excited to be a part of that process.”

Of course, she also likes what Meyers will be bringing to the basketball court.

“She’s got a nice shot, she’s a good leader, she’s going to be a great teammate for us,” Greer added. “The fact that she’s a young woman of character, has career goals and is driven to perform well in the classroom, basketball is just a bonus for us. She’s not just a basketball player, she’s a young woman that’s pursuing Christ, that’s pursuing a career and that wants to impact her community and the people around her for good. So we’re thankful that she’s part of us.”

Meyers said she chose Milligan, which is located in Johnson City, Tenn., because of the community there and the coaching staff.

“Coach Kylie has played a big part with me since my freshman year. It’s just good that she established that relationship with me,” she said. “I went on a visit there with my cousin there the other day and it just fit. I worked out with the team and fit in well with them so that really solidified my decision.”