You have permission to edit this article.
Edit
Subscribe
Our Publications
Home
News
Sports
Opinion
Digital
Classifieds
Advertise with Us!
e-Edition
1 of 5 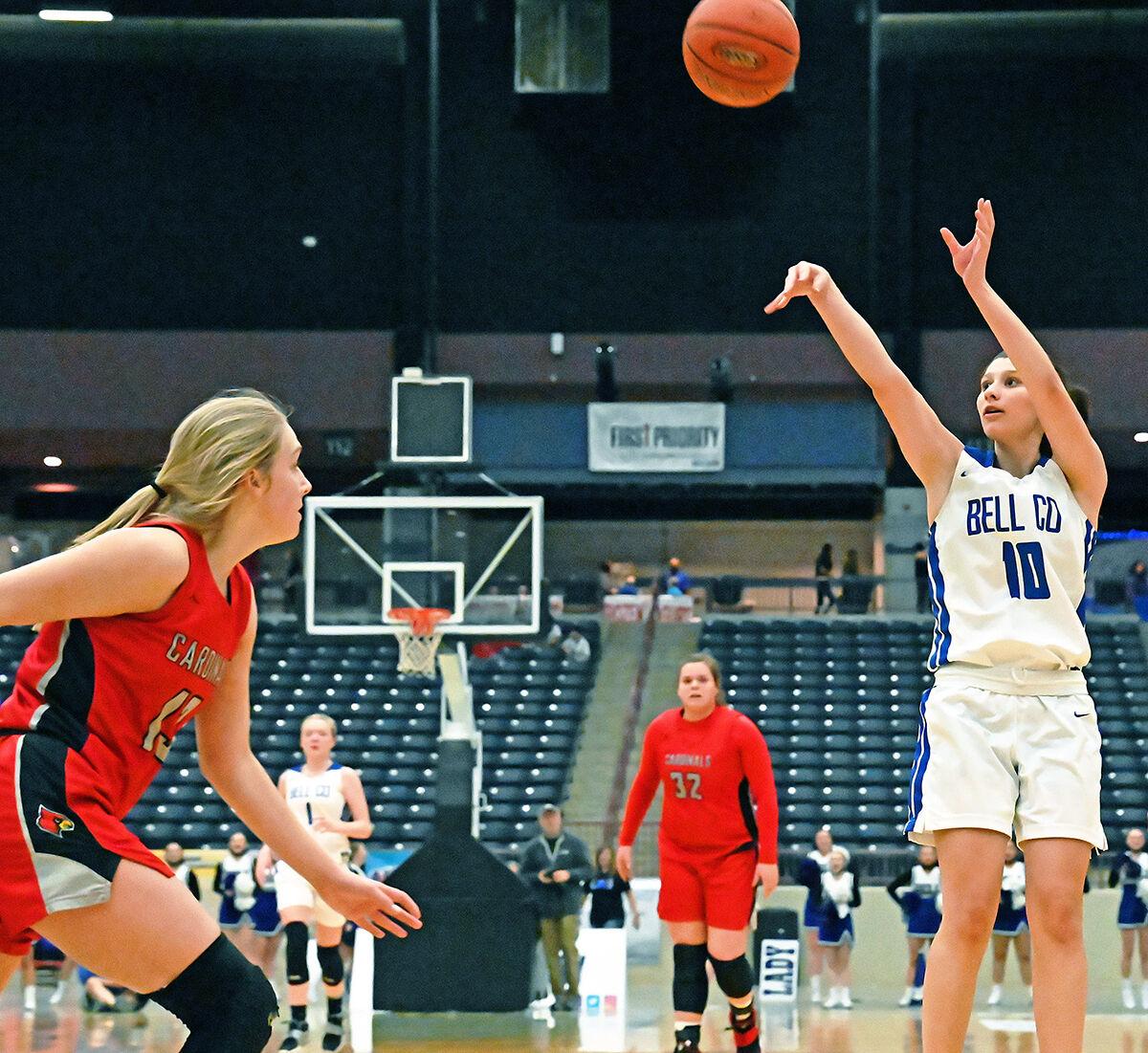 Lady Cat junior Ashtyn Meyers had the hot hand in Saturday’s 13th Region semifinal game against South Laurel. Meyers hit 11 of 17 shots a —including 9 of 15 from 3-point range and finished with 31 points in a 65-62 loss. 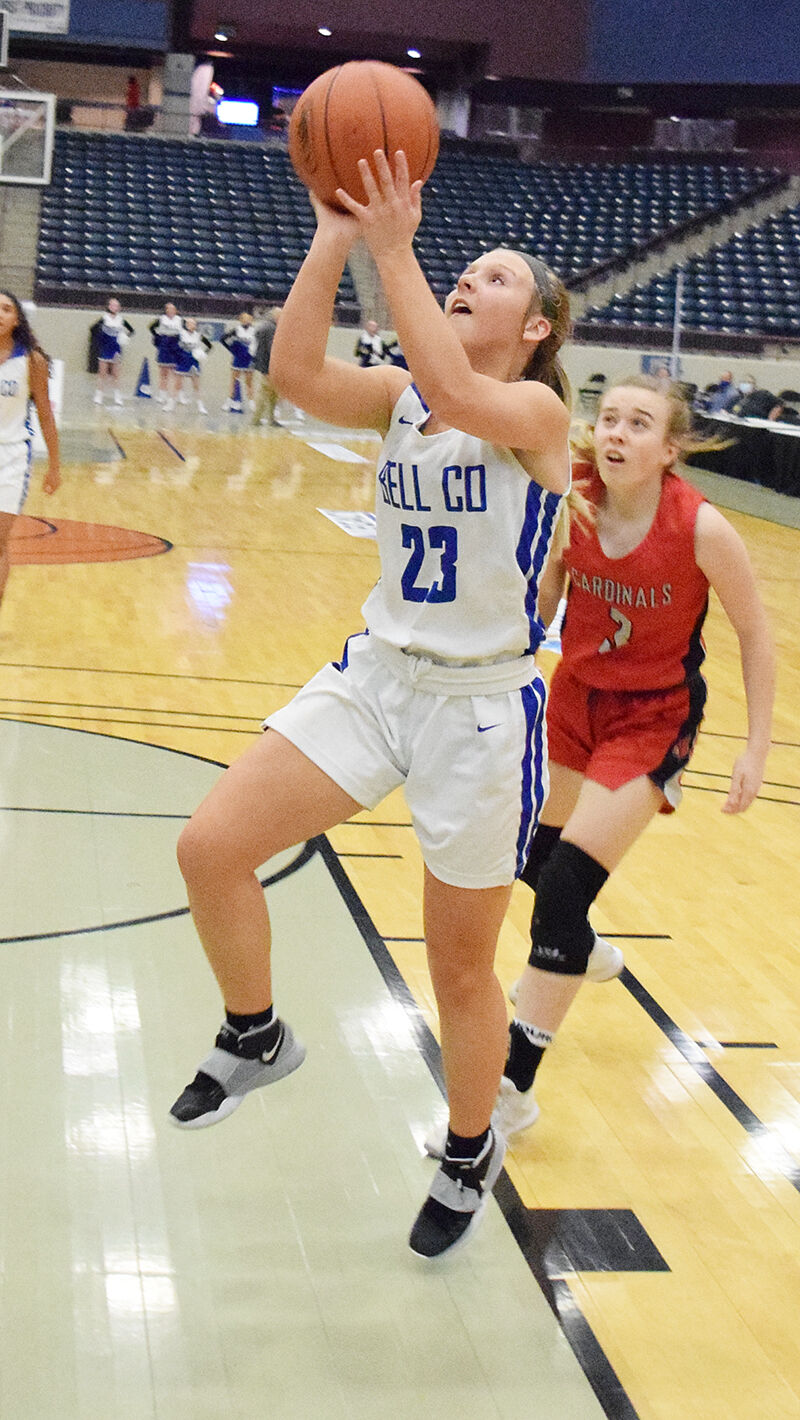 Lady Cat junior Mataya Ausmus goes in for a layup against South Laurel. 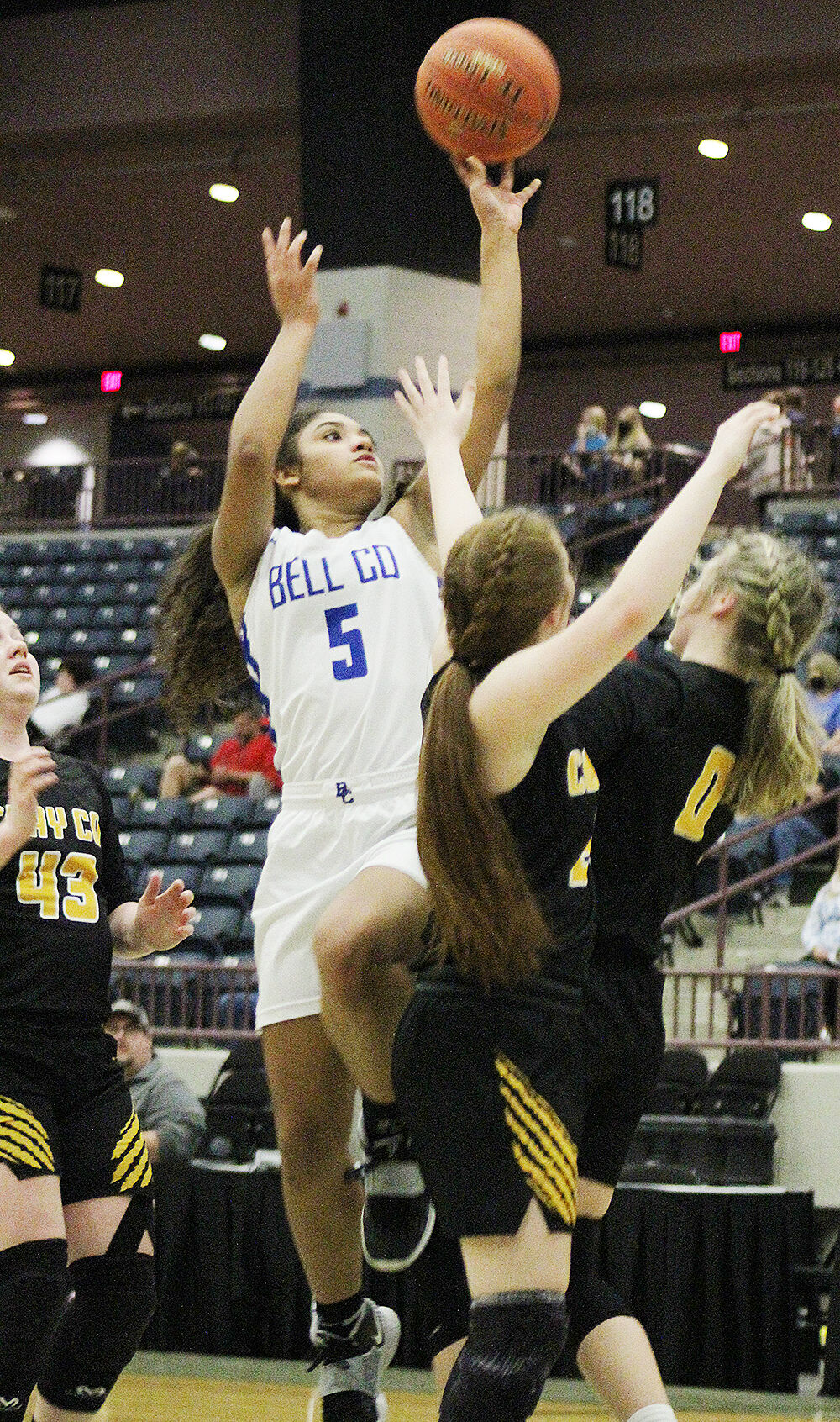 Nadine Johnson led the Lady Cats with 18 points in Thursday’s win over Clay County and added 13 in a tough semifinal loss to South Laurel in the 13th Region Tournament. 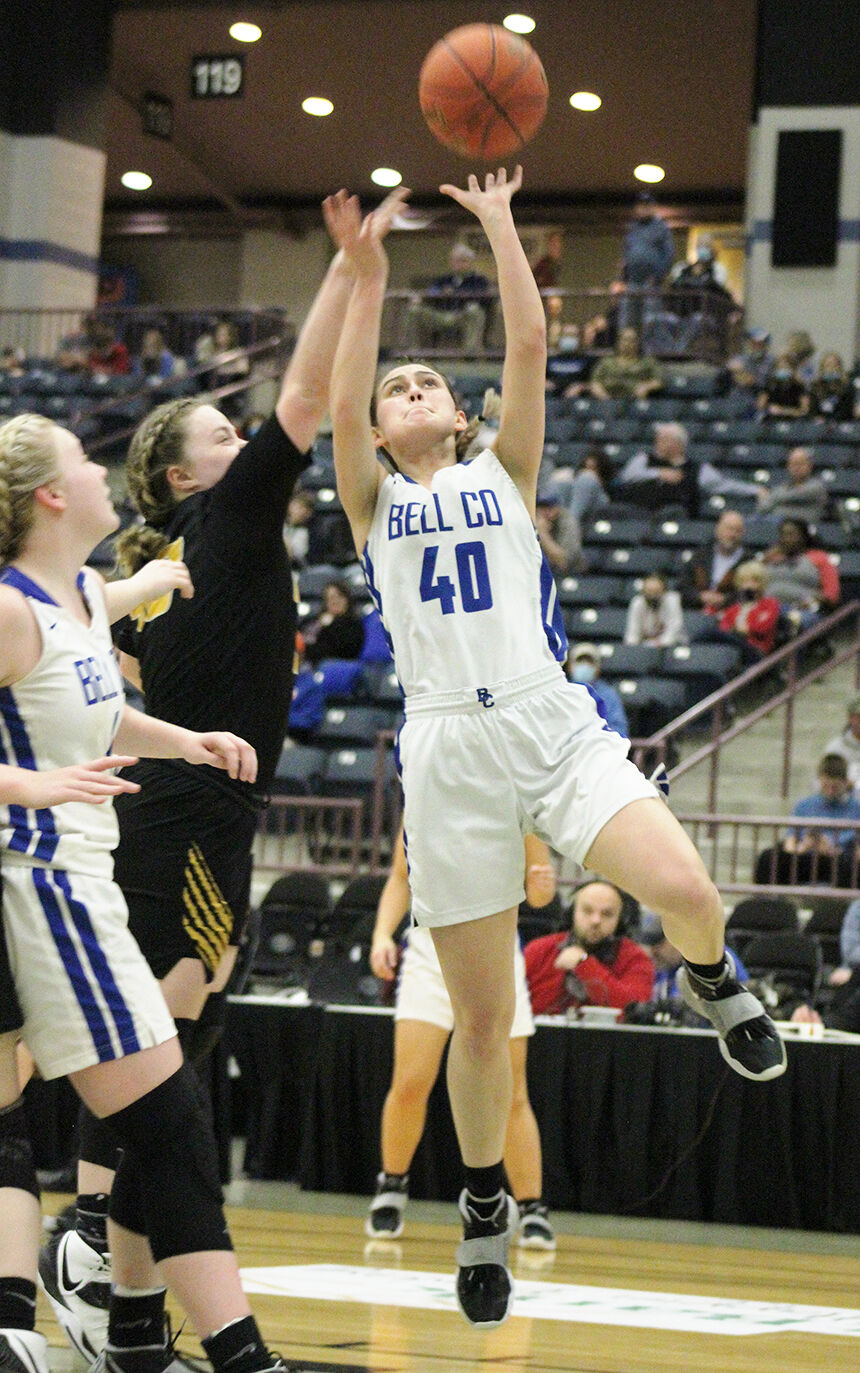 Senior forward Sara Kidwell gets off a shot inside against Clay County. 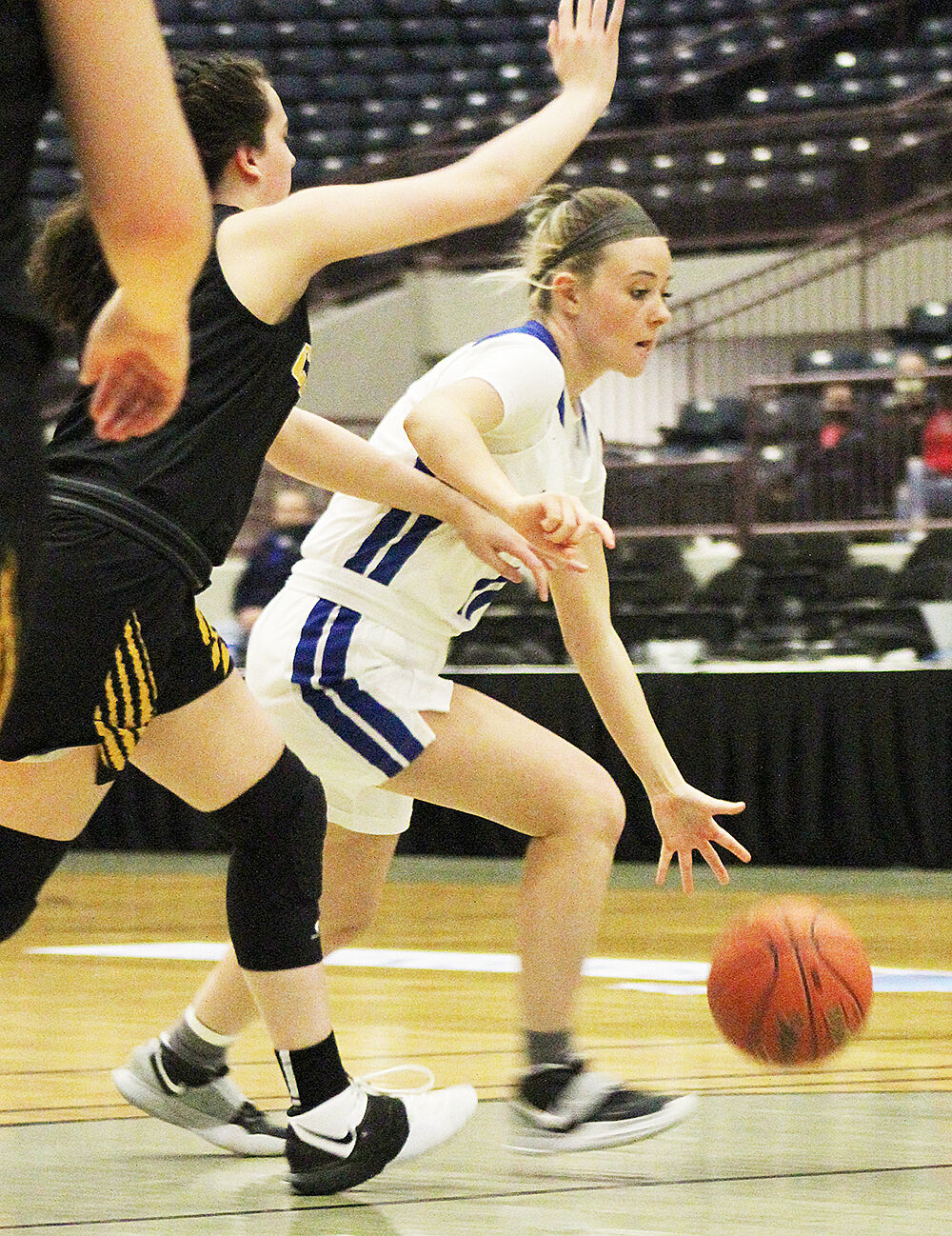 Lady Cat junior Ashtyn Meyers had the hot hand in Saturday’s 13th Region semifinal game against South Laurel. Meyers hit 11 of 17 shots a —including 9 of 15 from 3-point range and finished with 31 points in a 65-62 loss.

Lady Cat junior Mataya Ausmus goes in for a layup against South Laurel.

Nadine Johnson led the Lady Cats with 18 points in Thursday’s win over Clay County and added 13 in a tough semifinal loss to South Laurel in the 13th Region Tournament.

Senior forward Sara Kidwell gets off a shot inside against Clay County.

CORBIN — The Bell County Lady Cats saw their season come to an end on Saturday with a 65-62 loss to South Laurel in the 13th Region Semis. Bell County advanced to the semis with a 56-28 win over Clay County in the first round.

In the semifinals, the Lady Cats nearly made one of the greatest comebacks in the history of the 13th Region Tournament. They found themselves trailing South Laurel 59-41 with under four minutes to play but went on a 19-3 run to make things very interesting in the final seconds.

“I thought we played a little timid to start the game and then I thought our energy and our effort got better. The game kind of went back and forth a little bit until we hit that stretch there in the third quarter where we just got scattered. They hit some shots and we missed some easy ones and dug ourselves a hole,” Lady Cat coach David Teague said. “I’m proud of the kids and the way that they battled to get back and give ourselves a chance at it.”

Junior Ashtyn Meyers, who scored 31 points in the game, started the run with a 3 at the 3:46 mark. Nadine Johnson hit four straight free throws after a pair of Lady Cardinal turnovers. Meyers drained another 3 and pulled up for a 16-foot jumper in transition. A steal by Johnson led to a Mataya Ausmus basket and the lead was down to 59-55 with 52 seconds on the clock.

Ausmus scored again after two South Laurel free throws and Meyers hit a 3 after on Lady Cardinal free throw and the score 62-60 with 20 seconds to play.

““Ashtyn shot the ball really well tonight and she’s not done it at level before but I do know she’s a very good shooter and she’s capable of making those shots,” Teague said. “I was proud of her and she was wanting it. She wanted to take those shots and some of them were really deep and that got us going and got us back in that run.”

Rachel Presley missed the front end of the 1-and-1 and Johnson was fouled as she scrambled for the rebound.

The Lady Cat freshman went to the line for one and the bonus and a chance to tie the game with 14.9 seconds on the clock. Her first free throw rimmed out and Presley got the rebound and was fouled. This time she hit both free throws. Johnson quickled went in for a layup to make it 64-62 with seven seconds to play. With no timeouts left for Bell, the Lady Cardinals were content to led the clock run out. The officials finally ruled it stopped with two seconds left. Presley was fouled  with 0.9 seconds on the clock. She made the first and missed the second to set the final at 65-62.

South went on to upset North Laurel and win the 13th Region championship on Monday night.

In Thursday’s opening round the Lady Cats put on a defensive clinic against Clay County. They held the Lady Tigers to 23-percent shooting and only nine field goals in the game.

Bell led 14-4 after one quarter and the lead grew to 22-4 midway through the second. It was 32-12 by halftime and the Lady Tigers never threatened as the Lady Cats went on to the 32-point win.

“We knew we had to do some things defensively because Clay County likes to slow you down if they can. We wanted to speed them up and I felt like we did that,” Teague said. “We weren’t always hitting shots early on, but were able to do some things in transition and that was big for us.”

Bell County ends the season with a record of 22-5.

“That’s a very good season. With everything that’s gone on throughout the year, it’s been tough on everybody. To come out with 20-something wins and just a few losses, a district championship and make it the semifinals of the regional tournament, that’s a really good year. I’m real proud of these girls and their effort,” Teague said.

It was the final game for Lady Cat seniors Abby Cornett and Sara Kidwell.

“Abby and Sara have been with me a long time and they’ve stuck with us,” Teague added. “We hit a little stretch where we weren’t real strong and those two just stuck with us. They’ve meant so much to me and to our program. Both of them are very intelligent young ladies and they are going to be successful going forward. I’m proud to have been their coach.

Importance of Cancer Screening During the COVID-19 Pandemic