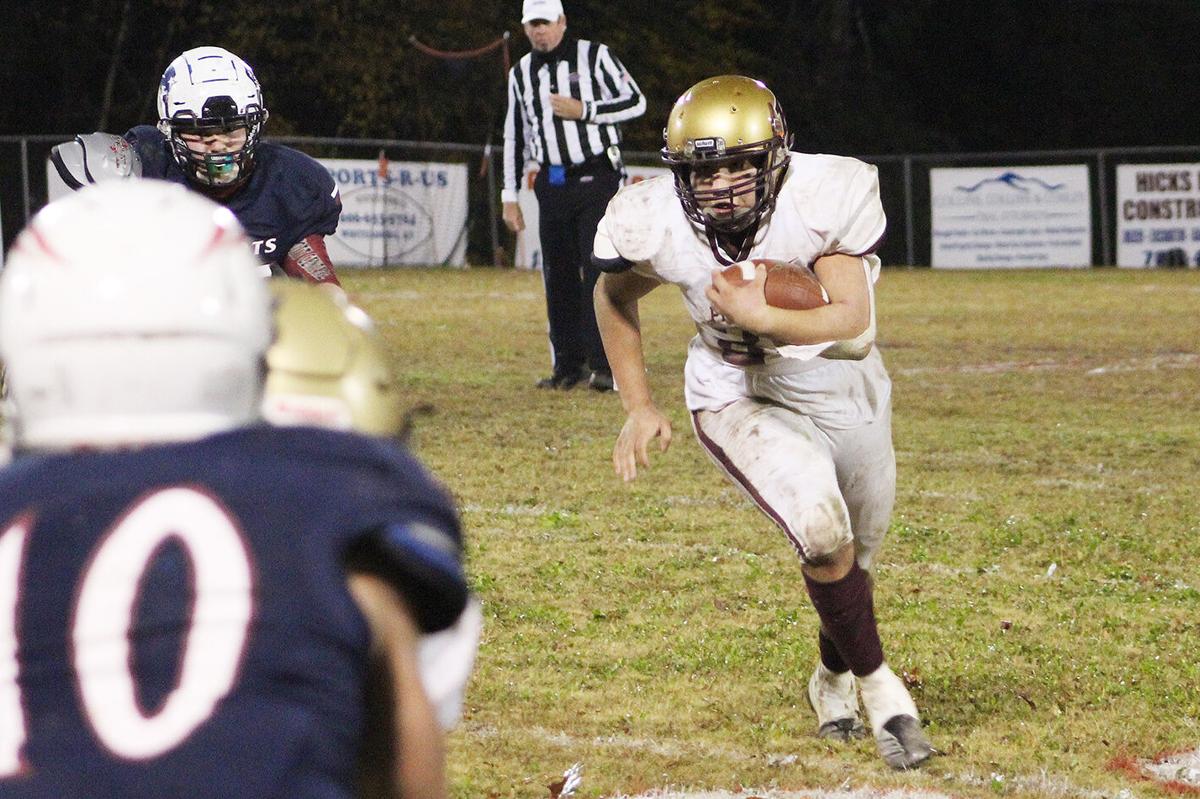 Pineville junior running back Atavius Flanary turns up field after taking a handoff during Friday’s game. Flanary ran for 103 yards and two touchdowns on 17 carries in a 29-19 win at Knott Co. Central. 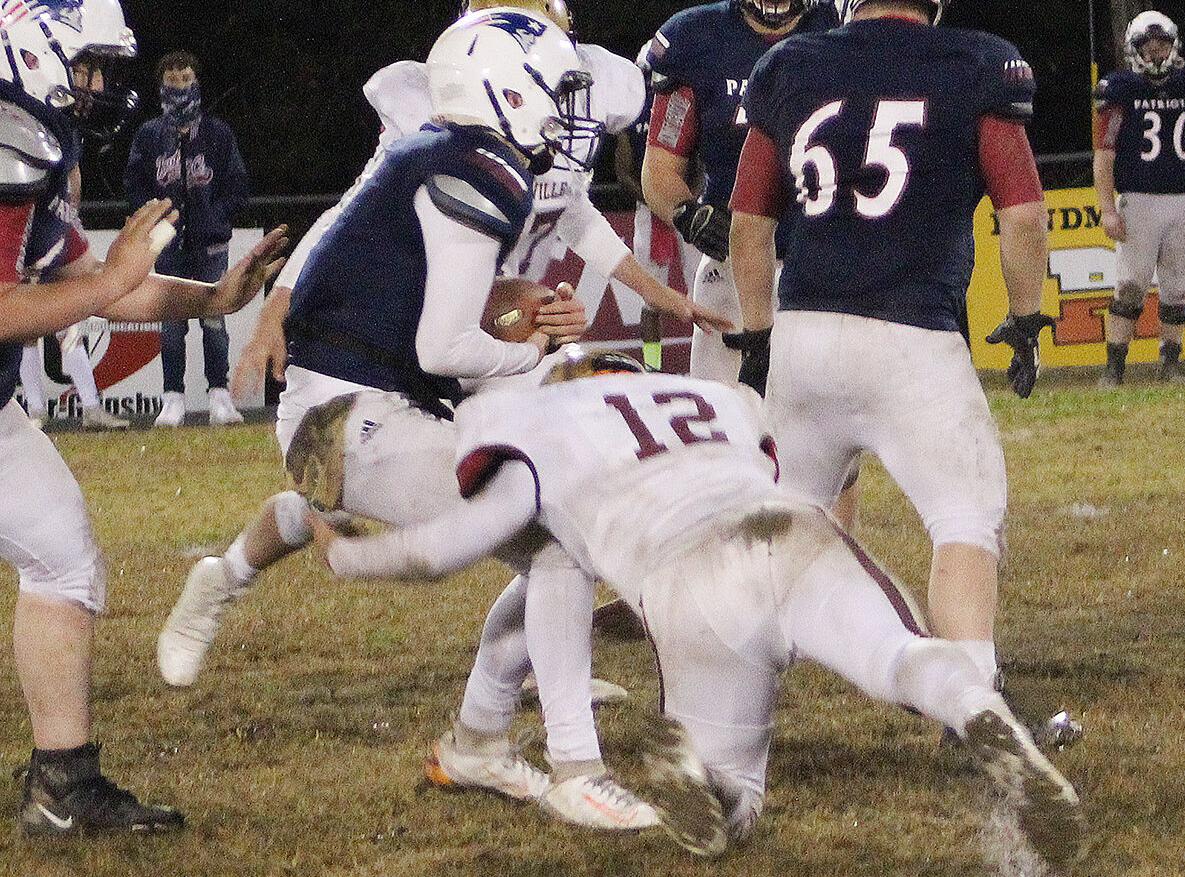 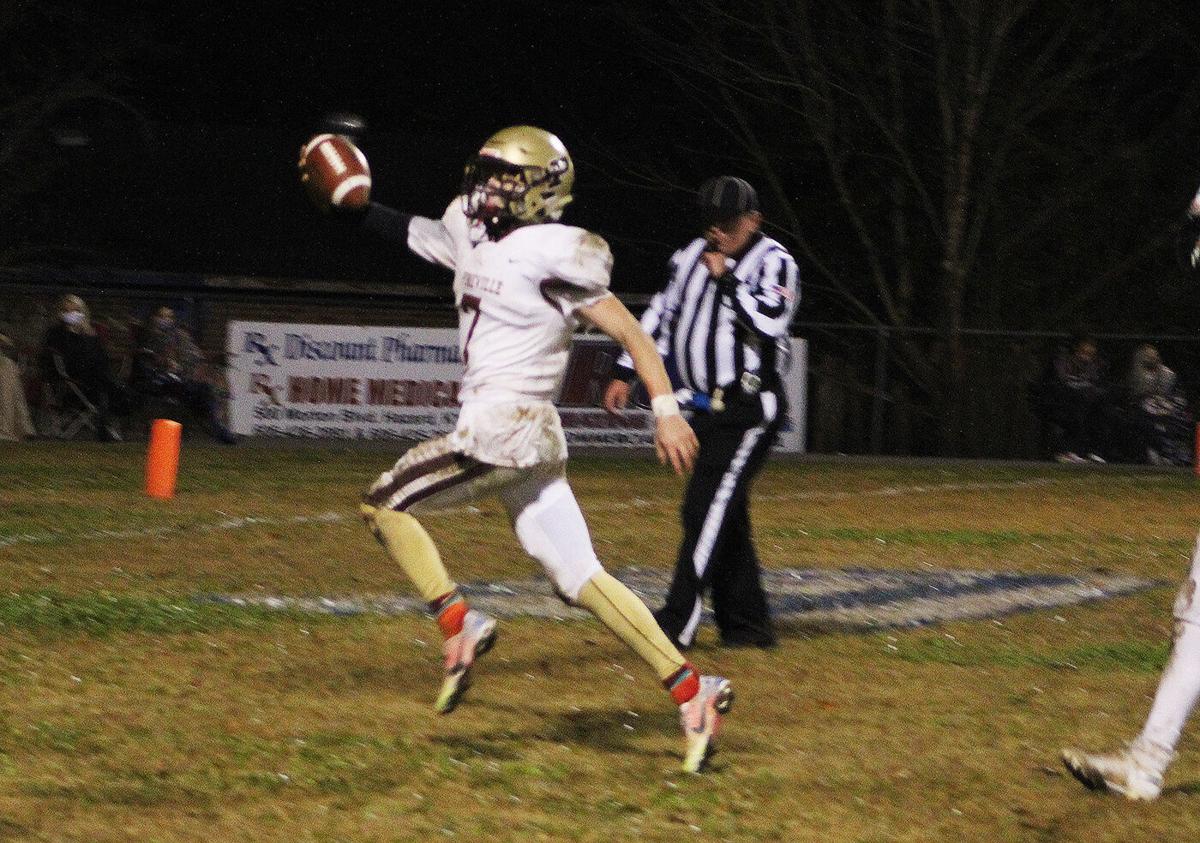 Reece Capps celebrates as he crosses the goal line. Capps scored on a 26-yard run in the fourth quarter to put the finishing touches on the Lions' 29-19 win. Capps ran for 179 yards on 16 carries and completed 5 of 8 passes for 110 yards in the game.

Pineville junior running back Atavius Flanary turns up field after taking a handoff during Friday’s game. Flanary ran for 103 yards and two touchdowns on 17 carries in a 29-19 win at Knott Co. Central.

Reece Capps celebrates as he crosses the goal line. Capps scored on a 26-yard run in the fourth quarter to put the finishing touches on the Lions' 29-19 win. Capps ran for 179 yards on 16 carries and completed 5 of 8 passes for 110 yards in the game.

HINDMAN — Junior running back Atavius Flanary ran for two second half touchdowns and senior quarterback Reese Capps threw for one touchdown and ran for another as the Pineville Mountain Lions overcame a bevy of penalties to come from behind and beat Knott County Central 29-19 last Friday.

“We came out in the second half and absolutely was the most physical football team I’ve seen in a long time. We just ran it down their throats,” Pineville coach Randy Frazier said. “I told them coming in that this was a better team than they showed against Middlesboro or against us last year. They’re very physical and I don’t know that we were ready to play at all. They came out and they kind of took it to us.

“I think we had three touchdowns called back and a lot of other penalties called on us. I will say we had to overcame a lot, we knew we probably would playing on the road and I’m very proud of our team.”

After trailing 13-7 at the half, the Lions took the third quarter kick and drove straight down the field. Capps and Flanary both had first down runs and a 21-yard Flanary run took the ball down to the Patriot 4. Two plays later Flanary scored on a 1-yard TD run to tie the game and Trevor Kidd added the conversion for a 15-13 PHS lead.

Pineville came up with a defensive stop, but lost a fumble. Knott took the lead midway through the third quarter as Slone Kizer passed to Landon Smith for an 11-yard touchdown. Their conversion try failed so the lead was just 19-15.

The Lions again drove straight down the field with Capps breaking a long run and Flanaray scoring from a yard out and adding the conversion for a 23-19 Pineville lead.

“He transferred down from Middlesboro and he had to sit out 365 days and just got eligible,” Frazier said. “He was a really big help especially in the second half. He’s not in shape yet but he’s a very physical runner and linebacker.”

Pineville took over again at their own 20 and went on a long drive that stretched into the fourth quarter. Clay Teague made a juggling catch over the middle and went for 29 yards out to midfield.

The Lions unveiled a new formation with Timothy Gambrel lined up at tight end and Timmy Hall lined up behind him in the left flank. With those two serving as lead blockers, Capps and Flanary were picking up chuncks of yards on the ground.

“What about Timmy Hall leading up there, some of the blocks he made were unbelievable. Like I said, it was just the most physical that I had seen in a long time,” Frazier added.

First Capps and then Flanary had touchdown runs called back with under 9:00 to play that would have sealed the win. Instead the Lions turned the ball over on downs and an unsportsmanlike conduct call gave Knott a first down at the 34.

On the very next play, Kizer went deep down the left sideline and Mountian Lion senior Braiden Lingar went up for the interception. Lingar returned it 30 yards to set the Lions up around the 35.

Flanary ran for 9 yards and then Capps found a crease up the middle for a 26-yard touchdown and a 29-19 PHS lead.

“That interception was probably the biggest play of the night, in my opinion,” Frazier said. “We had just had two touchdowns called back and turned the ball over. Boog went up and got that one and brought it back to their side of the field and then we go in and score to put the game away.”

The defense forced a turnover on downs and after Flanary and Capps both ran for first downs, the Lions ran out the clock.

It was a tought start for the Lions. Knott went up 7-0 in the first quarter on a TD run by Kizer. With every long run by the Lions getting called back due to holding, the Patriots dominated time of possession early on. Luke Akers intecepted and Clay Teague both had interceptions in the end zone in the second quarter to keep the score at 7-0.

“Our secondary has 13 interceptions in six games,” Frazier said. “We’re leading the state in Class A in interceptions per game, there’s another team that has 14 interceptions but they’ve played 8 games.”

The Lions tied the game by turning to their passing game. Capps passed to Noah Caldwell for 13 yards and a first down and hooked up with Gambrel for a 12-yard gain and another first down. Then Landon King caught a pass over the middle in stride, he got to the sideline and broke away from two tacklers near the 20 and walked into the end zone on a 46-yard touchdown. Luke Naylor added the extra point to tie the game 7 late in the second quarter.

Knott got a big return on the following kick and Kizer found Nick Miller for an 8-yard touchdown just before halftime.

“We threw the ball, that was the big thing. That got them out of their defense and we did what we needed to do to win the football game,” said Frazier.

Kidd led the Pineville defense with eight tackles, including three for loss while Hall was in on seven stops. Gambrel had two sacks and Ben Parks one.

Pineville (4-2) is scheduled to host Harlan in the first roundo of the playoffs on Nov. 20.

Knott Central (2-3) is scheduled to visit Breathitt County for their first round game.