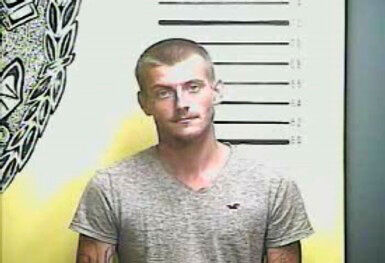 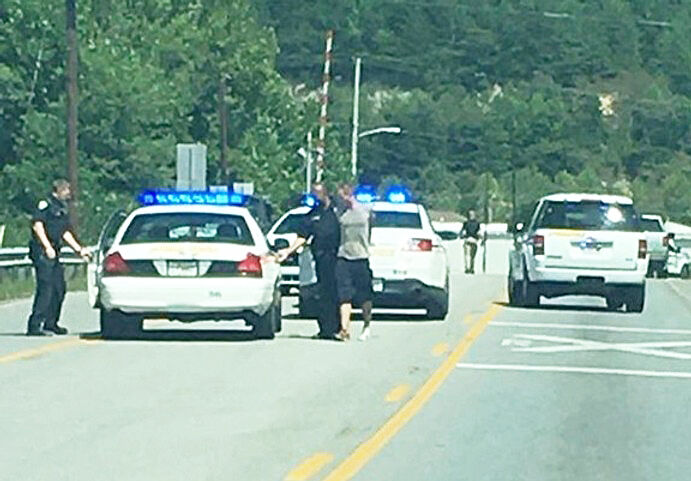 Middlesboro Police Officers take Robert Vaughn into custody on KY 441 after he led them on a chase in a stolen truck and then attempted to flee on foot by jumping a guardrail. 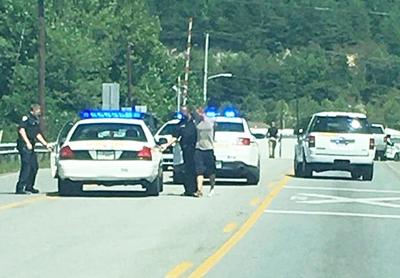 Middlesboro Police Officers take Robert Vaughn into custody on KY 441 after he led them on a chase in a stolen truck and then attempted to flee on foot by jumping a guardrail.

On Sunday July 26, 2020 the Middlesboro Police Department was notified by Claiborne County Sheriff’s Department to be on the lookout for a stolen 1994 Ford Ranger. The operator was identified as 26-year-old Robert Vaughn of Middlesboro.

Officer Chris Barnes attempted to locate Vaughn at a residence but was unable to. However, at approximately 3:25pm the officer was traveling westbound on KY 74 (Cumberland Avenue) and observed a truck matching the description of the vehicle traveling eastbound.  As the officer passed the vehicle, he was able to see that the driver was Vaughn. Officer Barnes then turned on the vehicle following for a short distance before activating he emergency lights and siren to initiate a traffic stop.

Vaughn then lead the officer from Cumberland Avenue, north to 11th street, then north on Highway 25E into the Middlesboro Mall parking lot, north onto 15th street, and then west of KY 441 , all while disregarding several stop signs, a traffic light, and several near misses of other drivers on the roadway.

While traveling west on KY 441, Vaughn struck Officer Barnes’ cruiser, lost control, and struck a 2004 Nissan Titan traveling eastbound driven by Emily Womack. Vaughn then exited the stolen Ranger while it was still in gear, causing it to crash again into Officer Barnes cruiser.

He then attempted to flee the scene and jumped over a guard rail, but Officer Barnes was able to catch up to him after a brief foot pursuit and take him into custody. There were no injuries associated with the incident.

Robert Vaughn was lodged in the Bell County Detention Center charged with:

Operating on a suspended or revoked operators license,

He was also served an outstanding warrant for theft by unlawful taking over $500.