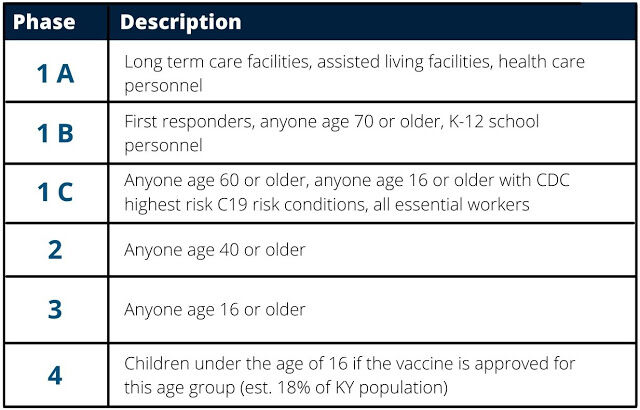 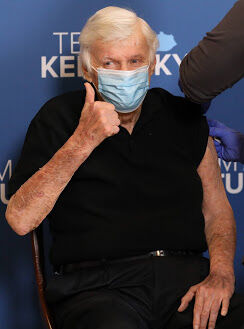 Gov. Andy Beshear and the state's top doctor announced Monday that people 60 and older, all essential workers and those in the highest risk groups will be next in line to get the vaccine for the novel coronavirus.

Meanwhile, as Beshear announced the latest pandemic numbers, all of them high, he again said the reasons for the recent rise in daily new cases and positive-test rate remain uncertain.

In its vaccine guidance the federal Centers for Disease Control and Prevention provides a broad list for people who are considered essential workers and conditions that are considered high risk. These groups will not be eligible for vaccination until those in the first two phases are complete.

After those 60 and older and essential workers are vaccinated, Kentucky will open them to those 40 and older, followed by 16 and older. The vaccines have not yet been approved for those under the age of 16.

Beshear and Health Commissioner Steven Stack expressed great disappointment in how slow the vaccinations are going, and offered a new plan to try to speed up the process.

Stack said the new goal is for vaccination providers to administer 90% of doses in their possession within a week of those doses arriving, even if they don't go to the group that they are designated for.

He added later, "We're still going to prioritize and start at the top of the pyramid every week. We're going to ask every site to schedule your vaccine for people who are at the highest tiers. But the goal is not to have it wait and hang over till the next week, it's to administer it and use it -- and then when you get the next shipment, start over again with that process."

Beshear said the state has received about 52,550 doses for long-term care facilities, but only 10,641 residents and staff, or 20.2%, have been reported vaccinated by Walgreens and CVS, which are doing the work under federal contracts.

The governor said there is a lag in reporting, but "I am not satisfied with the pace of vaccination here in Kentucky," and said the state had offered National Guard assistance to help the companies speed up: "We're going to push. I'll let you know, when we get our response, how many teams that lets us add."

Beshear also called for more urgency in the health-care personnel program, which has a reported completion rate of 41%: administration of 49,773 of the 122,100 doses allocated to it.

Several former Kentucky governors and their spouses received the vaccine, along with 11 leaders of the General Assembly, five Republicans and six Democrats. Beshear said it was important for public leaders to be seen getting the vaccine because "there is no question that there is vaccine hesitancy out there" and it has been proven that it helps people to overcome their concerns about vaccination when they see people they trust get vaccinated.

House Speaker David Osborne said on KET's "Kentucky Tonight" that he felt conflicted about getting a coronavirus vaccine just because of his public office, but "I had so many constituents who were expressing concern" about the vaccine that he thought he should provide an example.

Daily numbers: Beshear announced 2,319 new cases of the virus, the most ever reported on a Monday. That continued a steep increase in recent days and brought the seven-day rolling average for new cases up to 2,956, nearly what it was on Dec. 17.

A news release from Beshear's office on Sunday that he would "provide a full explanation of the positivity rate" Monday, but he only offered possibilities. He said the rate could be high because fewer asymptomatic people have been tested in the past seven days due to the holidays, because many testing facilities have been closed, or a the result of increased social gatherings: "We think it is some of both."

Beshear noted that three of the state's 10 hospital-readiness regions have more than 80% of their ICU beds occupied and the northeast region has 84% of its hospital beds occupied. The easternmost region is at 83.1% ICU capacity, Barren River is at 83.3% and Lake Cumberland region is at 95.6%.

"This shouldn't necessarily sound the alarm, but it should tell us that where we are continues to be fragile, that in just one week of not doing the things we need to do, we can give up gains that we've bought," the governor said.

Beshear reported 26 more deaths from Covid-19, about the average for the past week, bringing the total to 2,749.

"Folks, the only way that we can stop this now is to stop the community spread," said Beshear. "It's what we are doing in our communities or what we're not doing. It's not following the rules and regulations enough, not wearing a mask, not engaging in social distancing, not being careful that ultimately costs the lives of individuals in these facilities. Please, these are real people. . . . We just need to do better."

Did you know that Black Bears roam the Bluegrass?

Bobcats-Owls Battle for a 2nd Time in Five Days